It has been said that the best way to see a city is by wandering around, equipped with just enough of a plan to know where you need to be, but allowing room for improvisation along the way. It is with this mentality that I have managed to work my way around the momentous grid that is New York City, finding myself in wonder-induced reveries, overwhelmed with taxi rides at race track speeds, aromatic worldly cuisines (at any time desired) and enough vintage Hendrix records, theatrical Broadway excitement and ancient treasures on the museum mile to keep any culture buff occupied for a lifetime. Whilst absorbing the atmosphere to the best of my British trained abilities, I seem to have zoned in and out of different happenings, overhearing sound bites and snippets of conversations such as “…because this is New York” and “…yeah, but you know New York…” along the way.

After hearing this for the first time on a packed Subway train – all of the surrounding elements (a sea of commuters, failing air conditioning and a man slumped in a corner with a cage of newborn puppies) taken into account , it made complete sense. Although when I heard it again in a luscious green patch in Central Park and then something similar outside a painfully trendy espresso bar in the West Village, it sparked a sense of overwhelming togetherness that the city has; not only in its cosy architecture but in the relationships of its inhabitants. I realized that people here are proud of what they do and where they come from, having created their own rules and terms of conduct along the way and consequently maintaining a healthy city environment by talking about it.

Whether it’s the lady named Bonita serving me my morning latte and telling me to “Have a great day” or the homeless man in 86th Street Subway station pleading with commuters for any spare change with a remarkable politeness for such desperation, people here are courteous and genuinely believe in the power of language. For me, coming from a city where people avert eye contact if they see someone they know walking towards them down the street, this is a new and inspiring experience. In comparison to the UK, it seems like language manners have been taken to a new level of brilliance, even if “Have a nice day” comes as part of a job description.

Londoners are constantly reminded to be politically correct, taking care not to offend anyone in any way that could be held against us by law and ensuring that any text message or email we write doesn’t give the recipient the “wrong impression.” With so many rules and language concerns, one would think that customer service and even simple politeness should be first and foremost, but even during my last moments in the country, a trip to the airport magazine stand left me feeling disheartened and like I was more than lucky to have a crumpled piece of paper reading “London LHR to New York JFK” in my hand.

So far New York has proved itself to be firm but fair, if you treat people with respect then you will certainly get it back and it seems like the way to start is to show concern for the wellbeing of others through language. Before I came here I would never have dared speak to a stranger in an elevator or discussed football scores with a taxi driver, and the idea of saying hello to an innocent dog walker on the street just because your paths have crossed would probably seem entirely unnecessary to most Londoners. But in actively doing all of these things, I have managed to find a sense of belonging, even if it is approximately 3458 miles from home. 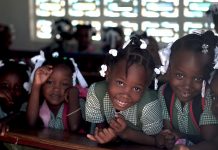