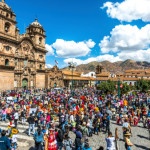 The Peruvian Ministry of Education worked with indigenous communities to officially recognize the alphabets of 24 indigenous languages. The measure states; “Thus, these 24 alphabets should be used by public entities every time they have to issue written information addressed to these ethnic groups, as it is established by the Law 29735, which regulates the use, preservation, development, recovery, foster and spread of the indigenous languages of Peru […] In this way, the right of children and teenagers to be educated in their own native language is respected. It’s been proven that this is the way they can learn better, as they feel more motivated, their cultural identity is respected, and their self-esteem becomes stronger.”