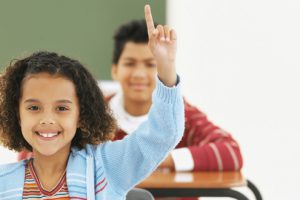 A new study of Spanish-English bilingual children by researchers at Florida Atlantic University published in the journal Developmental Science finds that when children learn two languages from birth each language proceeds on its own independent course, at a rate that reflects the quality of the children’s exposure to each language.

In addition, the study finds that Spanish skills become vulnerable as children’s English skills develop, but English is not vulnerable to being taken over by Spanish. In their longitudinal data, the researchers found evidence that as the children developed stronger skills in English, their rates of Spanish growth declined. Spanish skills did not cause English growth to slow, so it’s not a matter of necessary trade-offs between two languages.

“One well-established fact about monolingual development is that the size of children’s vocabularies and the grammatical complexity of their speech are strongly related. It turns out that this is true for each language in bilingual children,” said Erika Hoff, Ph.D., lead author of the study, a psychology professor in FAU’s Charles E. Schmidt College of Science, and director of the Language Development Lab. “But vocabulary and grammar in one language are not related to vocabulary or grammar in the other language.”

For the study, Hoff and her collaborators David Giguere, a graduate research assistant at FAU and Jamie M. Quinn, a graduate research assistant at Florida State University, used longitudinal data on children who spoke English and Spanish as first languages and who were exposed to both languages from birth. They wanted to know if the relationship between grammar and vocabulary were specific to a language or more language general. They measured the vocabulary and level of grammatical development in these children in six-month intervals between the ages of 2 and a half to 4 years.

The researchers explored a number of possibilities during the study. They thought it might be something internal to the child that causes vocabulary and grammar to develop on the same timetable or that there might be dependencies in the process of language development itself. They also considered that children might need certain vocabulary to start learning grammar and that vocabulary provides the foundation for grammar or that grammar helps children learn vocabulary. One final possibility they explored is that it may be an external factor that drives both vocabulary development and grammatical development.

“If it’s something internal that paces language development then it shouldn’t matter if it’s English or Spanish, everything should be related to everything,” said Hoff. “On the other hand, if it’s dependencies within a language of vocabulary and grammar or vice versa then the relations should be language specific and one should predict the other. That is a child’s level of grammar should predict his or her future growth in vocabulary or vice versa.”

Turns out, the data were consistent only with the final possibility — that the rate of vocabulary and grammar development are a function of something external to the child and that exerts separate influences on growth in English and Spanish. Hoff and her collaborators suggest that the most cogent explanation would be in the properties of children’s input or their language exposure.

“Children may hear very rich language use in Spanish and less rich use in English, for example, if their parents are more proficient in Spanish than in English,” said Hoff. “If language growth were just a matter of some children being better at language learning than others, then growth in English and growth in Spanish would be more related than they are.”

Detailed results of the study are described in the article, “What Explains the Correlation between Growth in Vocabulary and Grammar? New Evidence from Latent Change Score Analyses of Simultaneous Bilingual Development.”

“There is something about differences among the children and the quality of English they hear that make some children acquire vocabulary and grammar more rapidly in English and other children develop more slowly,” said Hoff. “I think the key takeaway from our study is that it’s not the quantity of what the children are hearing; it’s the quality of their language exposure that matters. They need to experience a rich environment.”

This project is supported by the National Institutes of Health (NIH) through grant number R01 HD068421.