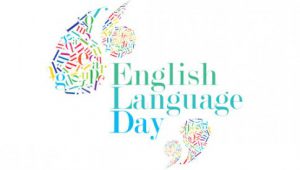 April 23 is United Nations’ English Language Day, which is celebrated annually on the date traditionally observed as both the birthday and date of death of William Shakespeare. The UN celebration is the result of a 2010 initiative by the Department of Public Information, establishing language days for each of the organization’s six official languages. The purpose of the UN’s language days is to celebrate multilingualism and cultural diversity as well as to promote equal use of all six official languages throughout the organization.

Under the initiative, UN duty stations around the world celebrate six separate days, each dedicated to one of the organization’s six official languages.

The day also marks the 100th anniversary of the publication of Daniel Jones’s English Pronouncing Dictionary, which tracks how spoken English has varied in terms of geography and over time.