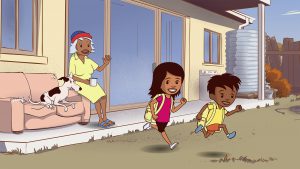 Australia’s National Indigenous Television channel (NITV) has launched a new animated series that brings Indigenous issues to the forefront in a novel way for children by having the main characters be Indigenous siblings. NITV states on their website, “In an Australian first, NITV presents Little J and Big Cuz, a contemporary children’s animation series offering a proud and positive view of Aboriginal Australia and the opportunities for learning within it, to young Indigenous kids as they prepare for school.”
Many Aboriginal children grow up without seeing accurate representations of themselves in the media surrounding them because of the lack of programming. The show Little J and Big Cuz aims not only to let Aboriginal children see themselves in a positive light on screen but also to normalize Indigenous culture for non-Aboriginal children.
While the program is currently being broadcasted in English, it will be translated into six Indigenous languages, according to Huffington Post Australia. Iconic Australian voice actors like Miranda Tapsell, Deborah Mailman, Aaron Fa’Aoso, Ursula Yovich, and Ningali Lawford-Wolf will be featured on the show. Deborah Mailman told Huffington Post, “These episodes will be done in language, so that means they will reach further into remote areas.”
According to NITV, the show is part of a larger strategy created by the Australian Council for Educational Research (ACER) that combines written, visual, and interactive teacher and family resource material to be used in classrooms and at home to create conversations about Indigenous life and issues and to encourage engagement.
The show will air weekly on NITV from Monday, May 1, at 4:00 p.m.