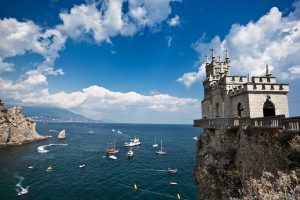 From 2013 to 2016, the number of students in Crimea in classes with Ukrainian as the language of instruction dropped from 13,589 to just 371 in 2016, according to a report by the Crimean Human Rights Group, an independent organization, citing data from Crimea’s Education Ministry (http://crimeahrg.org/situatsiya-s-dostupom-k-obrazovaniyu-na-rodnom-yazyike-v-kryimu/).
Human Rights Watch, a well-respected, nonprofit, nongovernmental human rights organization, spoke to parents who said that officials of the schools their children attend pressured them not to enroll their children in classes with Ukrainian as the language of instruction and then cut those classes from the curriculum because there allegedly were not enough pupils.
The issue of school instruction in Ukrainian language in Crimea reached. Last month, the International Court of Justice, the highest judicial arm of the United Nations, issued an injunction on a case filed by Ukraine claiming that, among other abuses, Russia was “systematically discriminating against and mistreating the Crimean Tatar and ethnic Ukrainian communities in Crimea, in furtherance of a state policy of cultural erasure of disfavored groups perceived to be opponents of the occupation regime,” “suppressing Ukrainian language education relied on by ethnic Ukrainians,” and “suppressing Crimean Tatar language education and the community’s educational institutions.”
The court noted that such restrictions could “lead to irreparable prejudice to the rights of ethnic Ukrainians in Crimea” and ordered Russia—unanimously—to “ensure the availability of education in the Ukrainian language.” A final ruling on the case is expected in the next few months, but it remains to be seen what effect any orders will have.