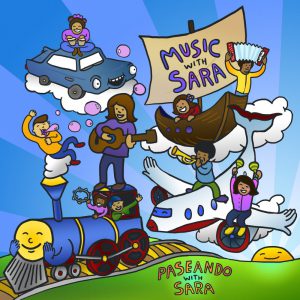 Sara Quintanar, an elementary school music educator, bilingual songwriter, and performance artist, has taken the international community by storm with her songs in Spanish for English-speakers to learn the language.

Her work in bilingual music began when she volunteered for her daughter’s Spanish language immersion program at Franklin Magnet School in Los Angeles in 2010. With her background in Bilingual Education and music, she was later hired by the school to teach language education through music with her program “Music with Sarah.”

Much of her music is available online for free through bandcamp, and feature songs that educators all over the world can use. Her first CD, Canciones en Español, debuted in 2010, and began receiving messages from teachers all over the world who were interested in her music. Two years later she released her second CD, “Más Canciones en Español,” and has later released a holiday album. In February she released her first truly bilingual album, with songs having lyrics in both Spanish and English. A songbook published by Scholastic with First Five California titled, “Talk. Read. Sing.” accompanies the album. The “Talk. Read. Sing.” program features comprehensive literacy materials like posters, lessons, classroom charts, and bilingual tracking charts and activity prompts.

The program features music by Sara along with award-winning bilingual children’s author and recording artist José-Luis Orozco, who is notably known for his songbook De Colores.

Quintanar serves as an example for educators taking creative paths towards bilingualism. She told LA Times, “I saw a demand for simple music in Spanish — repetitive and easy for children to learn.” She went on to say, ““I’m a local Glendale mom getting two million views online for simple bilingual music,” she said. “It doesn’t have to be quick, flashy or fancy. It’s a voice that isn’t too fast or complicated. This is exciting for me.”

View Sarah’s music at http://musicwithsara.bandcamp.com, her website at http://sara-quintanar.squarespace.com, and her work with Scholastic at http://www.scholastic.com/first5ca/.