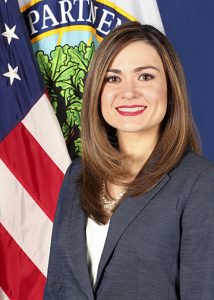 Aimee Viana has been appointed to the position of executive director of the White House Initiative on Educational Excellence for Hispanics (the Initiative).

According to a statement, :”Viana will work closely with the Hispanic community and the President’s Advisory Commission on Educational Excellence for Hispanics. She will align the work of the Initiative with the Department’s goal of rethinking education while expanding opportunities and improving educational outcomes for Latinos of all ages. Viana will also undertake the coordination of the Federal Interagency Working Group on Educational Excellence for Hispanics, partnering with other federal agencies to focus on the educational system and challenges facing the Hispanic community.”

Prior to her appointment, Viana was the senior executive director of the Secretariat for Lay Formation, Marriage, and Family Life for the Catholic Diocese of Raleigh, North Carolina, serving a population of nearly 500,000 individuals in over 32,000 square miles in that state. In this capacity, she implemented, led, and managed a new organizational structure and facilitated, in both English and Spanish, a leadership team focused on community support for children and families, youths and young adults, married life, and adult formation. In these efforts, Viana also administered the Hispanic ministry, African ancestry ministry, and Native-American ministry, among others. During this time, Viana focused on improving her team’s cross-functional performance, alignment, and accountability to its diverse constituents. She also collaborated to develop, initiate, and host the weekly Spanish-language internet news brief “Desde Raleigh a Roma” to further engage stakeholders through effective social media communications.

Previously, Viana undertook various roles in education. She served as a school principal and assistant principal, including at a U.S. Department of Education Blue Ribbon School of Excellence. Viana was honored as a top middle school principal in Western Wake County (North Carolina) by Cary Magazine in 2016. She was also recognized by Latino American Who’s Who in 2012 for her achievement in advancing the culture of the Latino-American community.

As a former elementary and middle school teacher, Viana fostered individual student development and support of families. She began her teaching career in Miami-Dade County Public Schools (Florida), serving a large percentage of Hispanic students, and went on to teach Spanish to middle school students in North Carolina.

A daughter of Cuban immigrants, Viana holds a Bachelor of Science degree in elementary education, with endorsement to teach English as a second language, and a Master of Science degree in early childhood education—both from Florida International University in Miami, Florida. She went on to complete the School Leaders Program at Florida Atlantic University, acquiring certification in educational leadership with specialization in K–12 school-site supervision. Viana holds teaching certificates in pre-K through elementary education, K–12 English as a second language, Spanish K–12 education, and school administration. Viana lives in northern Virginia with her husband, José, who is assistant deputy secretary and director of the Office of English Language Acquisition (OELA), and their three children.