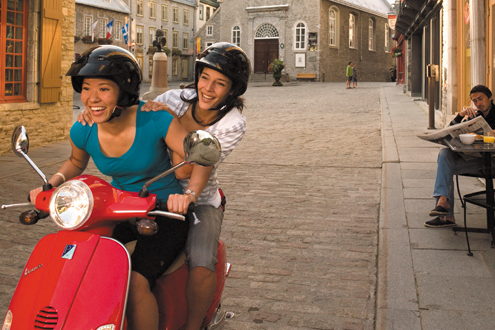 Students of French looking for an immersion experience should look to our neighbor to the north for language training that can lead to work opportunities in the U.S. French has long been pigeonholed as the language of romance, philosophy, and Paris. However, the Canadian variety enjoys a relatively high demand in many sectors that value their business relationships with Québec and other French Canadian strongholds, including marketers that package and sell products for both the U.S. and Canadian markets. The most obvious manifestations of this demand are the ubiquitous bilingual labels even though French is not widely spoken in the U.S. Shampoo bottles with French and English text, films with French subtitle options, and packaged foods with bilingual labels are evidence of the importance of French in marketing.

Superficially, the two varieties of French seem the same, which calls into question the need for specifically Canadian French localization. Canadian French and European French are mutually intelligible, much like American English and British English. However, there are some variations in vocabulary. For example, Canadians use the verb magasiner to go shopping, while the French say faire du cours. In France, technical terms and vocabulary describing new products and concepts often adopt English words. The European French speakers have embraced words like airbag, firewall, and proxy. In Canada, perhaps due to Francophone Canada’s complex relationship to Anglophone Canada, these words are re-imagined and translated into Canadian French: coussin gonflable, barrière pare-feu, and serveur mandataire. Companies that ignore the Canadian French technical vocabulary and substitute it for the English word, which would be acceptable in France, may offend their Canadian audience and lose out on the market. Language is such a sensitive issue in Canada that many companies translate their product names when they would not in other cultures and countries.

The translation and localization company, Lionbridge, recommends distinct translations targeted at Canadian and European French speakers for many reasons, including each culture’s different puns, idioms, jokes, and references that vary and can be used in advertising. Therefore, a Canadian French speaker on the job market can have an edge over a rival who studied abroad in Paris. Many U.S. based translation companies are headhunting French Canadian translators, while European French translators are not eligible for many projects.

Studying abroad in Canada is the experience of a lifetime. Montréal and Québec City offer urban settings with thousands of college students, eclectic and innovative gastronomy, and landscapes that marry old world architecture with modern design. More and more students flock to Canada each year despite the global economy. U.S. students can travel to and from Canada for much less than a trip to Europe.

“There are three main reasons students choose to study French in Canada,” explained Mark Barber from Languages Canada. “The first being the quality of language education they receive here. The second is the overall positive experience of their time in Canada, everything from welcoming homestay providers to making new friends. Third, we offer a North American experience and access to top-notch education. And for students studying at an accredited Languages Canada member program, the student insurance plan offers a great deal of peace of mind.”

The Languages Canada Quality Assurance Scheme is more demanding than that of Canadian provincial education standards — which is no small feat when Canadian education is considered among the best in the world.

Here are some schools to consider when planning a Canadian French immersion experience:

Université du Québec à Chicoutimi (UQAC)
Québec is a great destination for learning French because 80 percent of the population is French-speaking, and the highest concentration is in the Saguenay-Lac-St-Jean region where 99 percent of the 300,000 inhabitants speak French as their first language. This region is breathtakingly picturesque and there you can find the École de langue française et de culture québécoise of UQAC.

This school was founded in 1975 with the mission to offer students quality teaching as well as an in-depth Québecois cultural experience through activities and living with host families. With a satisfaction rate of 99 percent, this method clearly fulfills the expectations and needs of students.

Short, medium, and long-term immersion programs are offered throughout the year with the possibility of an internship. All students are eligible for university credits. For over 30 years, more than 17,000 students from all around the world and of all language levels contributed to its development.

Summer programs welcome a limited number of 275 participants from all over the world and a new 5-week immersion program, French and Music, is available for music students (25 participants).

Académie Linguistique Internationale (ALI)
Since 1993 ALI has been teaching French in the exciting, cosmopolitan city of Montréal, helping students fulfill their life goals and careers. ALI offers dynamic, communicative classes for all levels of learners, from complete beginners to advanced. In addition to core level classes, students can choose among elective classes such as: Business French, DELF and TCFQ preparation, Literature & Writing, and Culture of Quebec.

Students learn standard French as well as informal use, like idioms and slang. There are three different programs to choose from, as well as elective classes which allow each student to choose the learning focus they need. ALI is accredited by Languages Canada and is ideally located in downtown Montréal’s dynamic and lively, shopping and entertainment district. Transportation is very convenient: ALI is less than five minutes away from two subway stations, train stations, and many bus stops.

Université du Québec à Trois-Rivières
L’École internationale de français (ÉIF) is a department of the Université du Québec à Trois-Rivières offering French language training. Programs are designed to provide students with the ability to communicate effectively in French with an emphasis on written and oral skills, either to prepare for enrollment in another program at l’UQTR or for personal purposes. ÉIF also provides the opportunity to deepen students’ knowledge of contemporary Québec society.

Located on the shore of the St-Lawrence River, Trois-Rivières offers learners a marvelous lesson in history as well as a lovely site for total immersion in French. A diverse sociocultural program helps students become part of the Trois-Rivières community. It is a safe city surrounded by nature.

Le Canadien was a French language newspaper published in the British colony of Lower Canada at the beginning of the 19th century. The newspaper quickly became the voice of the parti canadien in their battle against the government of British Governor James Craig.

On March 17, 1810, the press and the papers of the editorial office were seized by the government. The printer and the paper’s founders were imprisoned based on rumors that the French Canadians and the Americans were plotting against the British. Despite the lack of evidence, the prisoners were not released until a year later without ever facing trial.