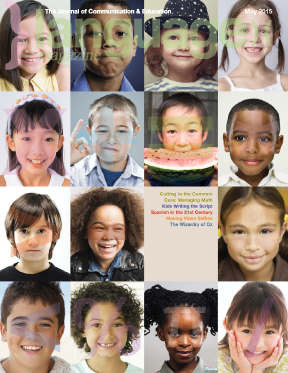 By some strange quirk of fate, or maybe to make administrators lives simpler, mathematics has traditionally been classified in the domain of science, whereas languages have always been considered arts. Of course, we’re now realizing that the delineations between academic subjects bear little resemblance to the reality of our world. Although it does not strictly comply with some language norms, math could be classified as a language unto itself, which upsets our tradition of compartmentalizing learning even more.

At or about the same time that the Sumerians started writing, some 5,000 years ago, they developed some written notation for mathematics and the first positional numerical system was then created. But it lacked a true zero, which was later introduced by mathematicians in the Indian subcontinent. The Arabic numerals used today represent this Hindu-Arabic numeral system, which spread like a language to the Arabs farther west. Our current form of these numerals developed in North Africa, from which it spread throughout Europe, and then around the world through trade, books, and colonialism.

Algebra, the all-important “key” to mathematics, is widely considered a basic language. The word “algebra” comes from the Arabic al-jabr (“restoration of broken parts”) and entered the English language during the Middle Ages from Spanish, Italian, or Medieval Latin. Now, algebra and many other areas of mathematics are vital to the understanding and development of computer programming languages. Information technology has truly married math and language, while becoming so much a part of our daily lives that it’s not just programmers who have to combine these skills. In order to take full advantage of the opportunities created through computer technology, a basic understanding of programming languages is very helpful.

The Common Core State Standards recognize the importance of language in math, and many math teachers have long insisted that students explain what it is they are doing as they solve problems. Now that assessments will require explanations, math and English language educators need to work together to provide students with the vocabulary and reasoning skills they need to pass.

Much of the research on the learning of reading and writing in one’s first language, as well as that on second-language acquisition, is relevant to the teaching and learning of mathematics. The practical implementation of such studies would benefit from the input of language educators.

Although progress has been made in increasing cross-curricular teaching in our schools, for the most part we continue with the traditional subject-based teaching format developed centuries ago. Of course, we need teachers to specialize in the higher grades and college, but we can still help students succeed by encouraging collaboration through projects that encompass more than one subject.

We like to think that nothing could be simpler than one plus one equals two but we’ve only arrived there through a mix of history and cultural interaction. In a similar way, we arrived at ABC. Math and language educators share a lot of common ground, and their students should be encouraged to make the most of it.

All the School’s a Stage
Pilar Alvarez, education director at the Young Storytellers Foundation, explains how the organization boosts literary confidence