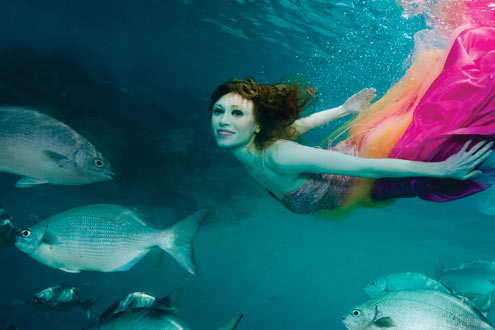 Recent editorials in Language Magazine caught my attention. In the June 2010 issue, the wonders of our global village are outlined to make the case for world languages and cultures teaching. The August and September editorials reflect on the need to expand materials in schools to match learning styles, and on the battleground issues of funding and standardized testing, respectively. This article aims to extend those discussions by examining the link between the spread of corporate ideals, technology, literacy, and language education.

The Liquid-Modern World:
Is it Something Completely Different?
The most notable characteristic of today’s liquid-modern society is that people now experience time in a way that is completely different from past societies. Time in the liquid-modern world is neither linear nor cyclical. Time has become punctuated in a movement between points whose connection is often tenuous at best. From the moment we wake up, many of us experience time as a series of events or episodes often viewed through multiple screens. People today can have the television on while listening to a music player and viewing a number of electronic documents and/or web browser windows as they simultaneously eat breakfast. It is this type of constantly connected media experience that scholars like Bauman (2007, 2008) and Eriksen (2001) describe as “liquid” in texture.
Why do we feel the need to rush ever faster? Part of the answer has to do with the explosion of content, and part with the nature of technological change. According to at least one expert, more information has been produced in the last 30 years than during the previous 5,000. “A single copy of the Sunday edition of the New York Times contains more information than a cultivated person in the eighteenth century would consume during a lifetime” (Ramonet, 1999, as cited in, Ericksen, 2001, p. 71). With so much information constantly at our fingertips, we feel the pressing urge to update. And, since speed is contagious (Ericksen), the faster things move, the less patient we become. Concentration and deep thought become difficult to sustain.

Reskilling for Global Communication
Public school teachers are constantly under fire for the poor performance of students. The solutions offered as remedies for the apparent decline in learning are again limited by the corporate agenda: more technology, more skills training, and more standardized testing. These limited choices are the direct result of the spread of corporate ideology through the idolization of markets. After all, “the market” (whatever that is) can do no wrong. The marketplace is competitive and competition results in the most efficient use of resources.
Most employers who will hire our students likely value transferable “skills” rather than specialist subject knowledge. Not surprisingly, the concepts of communication and skills in language teaching are currently defined by the organization of work in the global workplace (i.e., competition and efficiency) and changing ideas of knowledge in the liquid-modern world (Cameron, 2002). Competition and efficiency mark the highest goals of our society.
The ideological worldview of global (i.e., Anglo-American) capitalism is ubiquitous. As a case in point, much of the research that underpins pedagogical developments in language teaching is influenced by the corporate culture of enterprise and marketing. A good deal of Second Language Acquisition research starts out by framing communication as somehow necessarily an exchange of information that seeks to be effective and efficient given the pressures of the global marketplace (Block, 2002). Performance is measured in quantitative terms, since anything that cannot be measured is of no value. Block refers to this trend as McCommunication, following Ritzer’s (2008) idea of McDonaldization describing how product and systems rationalization leads to standardization or homogenization in society.
But solid data and analysis are no longer necessary for many corporate leaders in America. The righteousness of the self-serving market worldview that brought us “too big to fail” is reinforced by pseudo experts who speak in the euphoric tongue of positive thinking psycho-babble and stroke the massive egos of the entitled class (Ehrenreich, 2009). The culture of self-improvement has also significantly impacted approaches employed to teach language and communication. Today, there are listening and speaking courses for L1 learners that actually resemble those for L2 students (Cameron, 2002). The self-improvement culture tells people that they must work on their skills to get ahead in the competitive global workplace. Even the talking skills of native speakers are no longer taken for granted in the corporate world. According to neo-Taylorites (proponents of “scientific management” to improve efficiency), there are prescribed ways of communicating that are “effective” and “efficient,” and these should be broken down into skills that can be packaged, sold, and taught.
Much expert discourse about interpersonal communication is produced by psychologists, therapists and counsellors. Many of the communication strategies which are most enthusiastically advocated by experts in this tradition, such as speaking directly (the key recommendation of assertiveness training) and engaging in open self-disclosure, are problematic in cultures whose notions of personhood and modes of social organization diverge markedly from the Western/Anglo mode (Cameron, 2002, p. 80).
Ignoring the work of sociolinguists and ethnographers, many of the Western self-help experts claim that their modes of communication are universal and/or desired by people in different cultures. To them, problems in communication “arise only to the extent that languages embody different or incommensurable worldviews. It is those “deeper” differences that need to be leveled if global communication is to be effective” (Cameron, 2002, p. 69).
This corporate drive is the new, subtler version of linguistic imperialism. The linguistic structure and diversity of languages is not threatened, but values underlying a particular worldview are promoted at the expense of others. “The discourse of ‘global’ communication is not a case of postmodern ‘hybridity’ or ‘fusion’” (Cameron, 2002, p. 70). Rather, standardized communication norms and genres largely flow from the U.S. and U.K. to the non-English world.

The Inflection Point
The Internet is not a global communication network carefully designed by educators to enhance learning. It is a system that scatters attention as it affects human interaction in fundamental ways. Professor Nass at Stanford thinks the ultimate risk of heavy technology use is that it diminishes empathy by limiting how much people engage with one another, even in the same room. “The way we become more human is by paying attention to each other,” he said. “It shows how much you care” (Richtel, 2010a).
Technological deskilling diminishes the social and language skills of our youth. Take for example the recent activity, or non-activity, amongst college roommates. Young people used to communicating in short bursts of texting seem to have trouble working out everyday conflicts. They instinctively contact mom and dad who, accustomed to the speed of digital communications, have a tendency to jump in and put their child’s “passage to adulthood on indefinite hold” (Hofer and Moore, 2010, p. 13). So much for growing up, and so much for empathy.
But empathy is the stuff that makes us human. “We are at an inflection point,” according to Dr. Nass. “A significant fraction of people’s experiences are now fragmented” (Richtel, 2010a). As a species, is empathizing a skill we can afford to lose? How should educators in this liquid-modern world respond?

Tim Stewart ([email protected]) is a member of the faculty of the Institute for the Promotion of Excellence in Higher Education at Kyoto University. He has been training teachers as well as teaching communication and intercultural studies courses for 20 years.