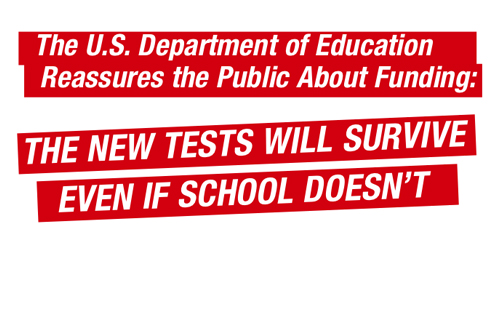 Dolores Umbridge, Assistant Secretary of Education, U.S. Department of Education, reassured educators and parents today that the huge budget cuts mandated by the new budget agreement will not harm our children. “The essentials, the new tests, will remain intact,” she announced. “The Department of Education is firm on its plans to require end-of-year tests, formative tests, and, we are hoping, fall pre-tests in all subjects. We are also firm in our resolve to require pre-kindergarten screening, and, as planned, all tests will be administered online.”

Reporter H. Potter from the Hogwarts Daily led the question and answer portion of the press conference with this question: “What about the huge expense of the tests? It has been estimated that just getting each student connected to the internet will cost billions.”

In response, Umbridge admitted that the new budget was a “game changer”: “Yes, of course we will have to cut back elsewhere. The Department of Education has planned for these immediate steps: The first step will be to fully adopt the Teach For America model: All teachers will be hired for two-year terms. This will eliminate extra pay for seniority and, of course, retirement benefits, so teachers will no longer be able to live in luxury when they retire. Second, cuts are also planned for other non-essentials. We will immediately eliminate wasteful programs such as free breakfast/lunch programs, school nurses, and libraries. School, we believe, should not be a welfare program.”

Mr. Potter then commented: “Why not just get rid of public schools while you’re at it?”

Umbridge responded that this option was also “on the table”: “This is a creative idea that we have been discussing. We would, of course, keep the tests. It would be up to the families to help students prepare for the tests, which will be a great incentive for private school and tutoring entrepreneurs. In doing this, we are simply taking the idea of school turnarounds to the next level: We will turnaround every school in the country, and replace them with vigorous private-sector services that focus students on test preparation.

And to make sure we remain financially solvent during the coming hard times, a modest fee would be charged for taking each test. The tests, of course, would be required for every student up to age 16 to make sure all students are making adequate progress in mastering 21st century skills.”

Umbridge concluded by restating her pledge: “Remember what Secretary Duncan has been saying: ‘Don’t act softly and tinker on the margins.’ Our plans are to use the crisis as a way of making things better. It forces us to eliminate useless programs, and sharpens and intensifies our focus on what really counts: Tests.”

Mr. Potter managed to get in one more question: “We all agree that some testing is a good idea, but isn’t this too much testing?”

As she was leaving the podium, Ms. Umbridge answered: “You can never have too much testing.”

Stephen Krashen is professor emeritus at University of Southern California.