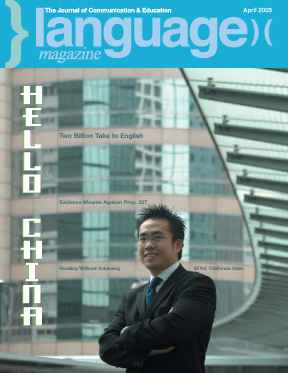 Two weeks ago, my wife gave birth to our first child, so the last month has passed me by in a wave of chaos and elation. However, I am already thinking ahead to the challenges that he and all of the other children born in Cali­fornia will face in getting the education they deserve.

We are lucky to be in a position where we have the choice of whether or not to send him to preschool, but preschool for all makes sense all round. Investing public money to make preschool available to every four-year-old in Cali­fornia would generate an estimated $2 to $4 in benefits for every dollar spent, according to a RAND Corpora­tion study issued last month.

The study estimates that the cost of a high quality universal preschool program would be more than offset by benefits such as a drop in the amount of special education provided, less grade repetition among K-12 students, less youth and adult crime, and a more productive state workforce.
Preschool education is an increasingly common experience for the nation’s young child­ren, with 66 percent of U.S. four-year-olds and 43 percent of three-year-olds enrolled in some type of program during 2001. In California, about 65 percent of the state’s four-year-olds are enrolled in preschool.

But there are wide variations in enrollment rates based on factors such as a child’s race, family income and parents’ education. Enrollment is lowest for Hispanic children. While just 36 percent of four- and five-year-olds in California whose mothers have not completed high school are enrolled in early education programs, 65 percent of children whose mothers have a college degree attend preschool.

By the age of three, many minority and poor children already are far behind in cognitive development. When disadvantaged children are placed in early care programs staffed with enough well-educated caregivers to give the children individual attention, the effects are positive, research shows.

Despite the on-going efforts of organizations like the National Council of La Raza and the California Association for Bilingual Education, Governor Arnold Schwarzenegger vetoed legislation to establish a blue ribbon commission on preschool education last year. California currently lags behind most other states in the number of children who are able to take advantage of a preschool education. Among all states, California ranks 37th in its preschool and childcare enrollment rates. Half of all preschool-aged children in California are Latino, yet they are underrepresented in state preschool programs, thus denying them the social and academic benefits that these programs provide.

Now that the world-renowned economists of the RAND Corporation have proven that universal preschool is a wise investment, the debate should end, however we must all continue to campaign for this right if our child is to have the benefit of being surrounded by children of all races, linguistic and socio-economic backgrounds in his preschool.

Academically Speaking
John M. Swales on how spoken academic English has a grammar all of its own

Last Writes
Doing a No. on English