Time to Ditch the Agenda 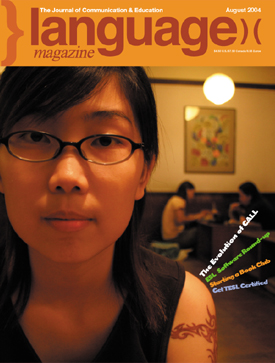 The body of evidence supporting bilingual education and the long-term benefits of multilingualism is growing steadily. Last month, we reported on a Canadian study that suggests bilingualism helps seniors to concentrate. In February, California’s Legislative Analyst’s Office published a report asserting that “progress to fluency is slow” for English Language Learners (ELLs) six years after Proposition 227 severely limited bilingual education in the state.
In January, a national review of 17 studies covering more than three decades of research found that “bilingual education programs produce higher levels of student achievement in reading than English-only programs.”
Over the last year, several studies have indicated that bilinguals perform better across the whole spectrum of academic subjects.

Now, there is a new study out which not only challenges the very basis of California’s Proposition 227 (see page nine), but also calls into question the claims made by the English–only supporters of successes since the implementation of Prop. 227.

In light of such evidence, the only responsible action must be to re-examine policy of replacing bilingual education with English immersion. An independent panel of educational experts should be created solely for this purpose, and enlightened decisions can then be made on its findings. Of course, such action would have its costs, but these costs would be minuscule when compared to the cost of failing to provide the best educational platform for the next generation of Californians.

However, there is an incredible reluctance amongst legislators to revise their position on a particular issue. For some strange reason, we are led to believe that changing one’s opinion or position on a particular issue is a sign of weakness, instead of a value judgment based upon developments in information and circumstances. Being able to adapt to new information and admit that you may have made ill-informed decisions which you are prepared to revise demonstrates strength of character. The campaign against bilingual education in California led to similar moves across the U.S., so questions about the basis on which it was founded should be aired in the national arena. If the only goal of English-only protagonists is to improve the education for all of our children, as they claim, then they too should support any initiative to research the efficacy of educational systems.

This month, states and school districts will be releasing the test scores of their pupils. Whatever the results, we can be sure that the majority of legislators will use them to support their own political agendas. Let’s hope that a few good politicians have the strength of character to reevaluate their positions when presented with new information.

Pronounced Perfect
In the third part of our series on teaching English pronunciation, Steven Donahue explains how to master the most common consonants