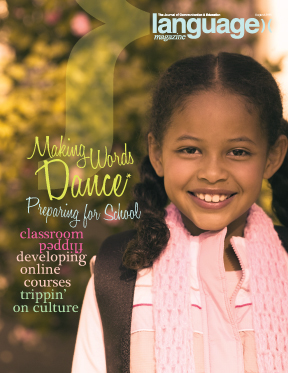 Over the last month, the art of diplomacy has been in the spotlight—we’ve seen the signing of an historic nuclear agreement between the U.S., the UK, Russia, Germany, France, China, the European Union, and Iran; the restoration of full diplomatic relations between the U.S. and Cuba; and the formation of the Commission on Language Learning, a national effort to examine the current state of U.S. language education, to project what the nation’s education needs will be in the future, and to offer recommendations to meet those needs (see page 9).

Diplomacy has developed many meanings since its inception by the Ancient Greeks—the word derives from the Greek δίπλωμα, meaning making a deal with other countries—but language is key to them all, especially its popular definition as “the phrasing of statements in a non-confrontational manner to find mutually acceptable solutions to a common challenge.”

As Stephen Pinker points out, “A common language connects the members of a community into an information-sharing network with formidable collective powers. Anyone can benefit from the strokes of genius, lucky accidents, and trial-and-error wisdom accumulated by everyone else, present or past. And people can work in teams, their efforts coordinated by negotiated agreements” (The Language Instinct, Penguin Books, 1994). The processes of diplomacy—communicating, negotiating, reaching, and formulating agreements, collecting, creating, transmitting, and recording knowledge—all depend on language.

Now, English may have become the world’s lingua franca, and in so doing overtaken French as the language of diplomacy, but it cannot be relied upon as the sole means of diplomatic communication. Despite the fact that most world leaders and diplomats have a good understanding of English, they cannot be expected to divert from their mother tongues when they are involved in complex, delicate, nuanced negotiations. Of course, interpreters play a hugely important role in diplomacy however, the insertion of another party between negotiators not only distances them but can result in misunderstandings, especially if the parties have little knowledge of each other’s language and culture. There have been numerous examples of high-stakes miscommunications over the years, and, in just the last two months, we’ve seen the resignations of two of the world’s top CEOs—Anshu Jain, a British national at Deutsche Bank and Brady Dougan, an American who struggled with German during his eight years at Credit Suisse Group—blamed largely on their inability to communicate complex ideas in German. Bear in mind that 64% of Germans speak English (Eurobarometer, 2006) and nearly everyone learns it at school.

The American Academy of Arts and Sciences’ new Commission on Language Learning is a first step in changing the U.S. perception of multilingualism as a “luxury.” If we are to survive and thrive in our interconnected world, diplomacy and negotiation at all levels of society will be essential, and no automated device or interpreter can replace the interaction between two humans who understand each other’s culture and language.

Richard Lederer (page 46) highlights one of history’s most catastrophic and horrific misinterpretations that may have led to the deaths of hundreds of thousands of people. Our interdependent global society is now facing what many see as its biggest challenge: climate change. To tackle this challenge, we will need international collaboration and understanding on a scale never seen before. We need to act now to internationalize our linguistic, cultural, and social understanding.