Blurring the Line between Language and Culture

Fatiha Guessabi argues that culture is a language in itself 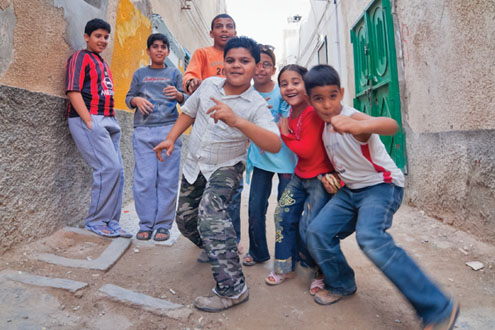 Language always carries meanings and references beyond itself: The meanings of a particular language represent the culture of a particular social group. To interact with a language means to do so with the culture which is its reference point. We could not understand a culture without having direct access to its language because of their intimate connection.

The human communication process is complex, as many of our messages are transmitted through paralanguage. These auxiliary communication techniques are culture-specific, so communication with people from other societies or ethnic groups is fraught with the danger of misunderstanding, if the larger framework of culture is ignored.
Growing up in a particular society, we informally learn how to use gestures, glances, slight changes in tone or voice, and other auxiliary communication devices to alter or to emphasize what we say and do. We learn these culturally specific techniques over many years, largely by observing and imitating.

The most obvious form of paralanguage is body language, or Kinesics, which is the language of gestures, expressions, and postures. However, the meaning of words can also be altered by tone and character of voice.

Language is culture and culture is language

Language and culture have a complex, homologous relationship. Language is complexly intertwined with culture (they have evolved together, influencing one another in the process, ultimately shaping what it means to be human). In this context, A.L.Krober (1923) said, “culture, then, began when speech was present, and from then on, the enrichment of either means the further development of the other.”

If culture is a product of human interaction, cultural manifestations are acts of communication that are assumed by particular speech communities. According to Rossi Landi (1973), “the totality of the messages we exchange with one another while speaking a given language constitutes a speech community, that is, the whole society understood from the point of view of speaking.” He further explains that all children learn their language from their societies, and during the process of learning a language also learn their culture and develop their cognitive abilities.

Language communicates through culture and culture also communicates through language: Michael Silverstein proposed that the communicative force of culture works not only in representing aspects of reality, but also in connecting one context with another. That is, communication is not only the use of symbols that “stand for” beliefs, feelings, identities, or events, it is also a way of bringing beliefs, feelings, and identities into the present context.

According to the linguistic relativity principle, the way in which we think about the world is directly influenced by the language we use to talk about it. “The real world is, to a large extent, unconsciously built up on the language habits of the group. No two languages are ever so similar that they represent the same social reality. The worlds in which different societies live are distinct, not merely the same with a different label attached” (Edward Sapir, 1929). Therefore, to speak is to assume a culture, and to know a culture is like knowing a language. Language and culture are homologous mental realities. Cultural products are representations and interpretations of the world that must be communicated in order to be lived.

The problem lies in what happens when cross-cultural interactions take place, i.e., when message producer and message receiver are from different cultures. Contact among cultures is increasing and intercultural communication is imperative for anyone wanting to get along with and understand those whose beliefs and backgrounds may be vastly different from their own.

Culture is a fuzzy set of attitudes, beliefs, behavioral conventions, basic assumptions, and values that are shared by a group of people and that influence each member’s behavior and each member’s interpretations of the meanings of other people’s behavior. And language is the medium for expressing and embodying other phenomena. It expresses the values, beliefs and meanings which members of a given society share by virtue of their socialization into it. Language also refers to objects peculiar to a given culture, as evidenced by proper names which embody those objects. Byran posited that “a loaf of bread” evokes a specific culture of objects in British usage unless a conscious effort is made to empty it of that reference and introduce a new one. So, we can conclude that language is a part of culture, and through it, we can express cultural beliefs and values, and that the specific usages of a given word are peculiar to a language and its relationship with culture.

In fact, language teaching means, inevitably, language and cultural teaching. According to Buttjest, “Culture learning is actually a key factor in being able to use and master a foreign linguistic system.” The Bellagio Declaration of the European Cultural Foundation and the International Council for Educational Development states, “For effective international cooperation, knowledge of other countries and their cultures is as important as proficiency in their languages and such knowledge is dependent on foreign language teaching.”

Learning a language is therefore learning the behavior of a given society and its cultural customs. Language is a product of the thought and behavior of a society. An individual language speaker’s effectiveness in a foreign language is directly related to his/her understanding of the culture of that language (Taylor, 1979), and it is possible to consider teaching culture through learners’ own languages, which can be used in a specific way to interpret the other culture (Ager).

Finally, we can conclude that immersion teaching accelerates the acquisition of cultural knowledge: “…the integration of language and culture learning by using the language as medium for the continuing socialization of students is a process which is not intended to imitate and replicate the socialization of native-speaker teachers but rather to develop student’s cultural competence from its existing stage, by changing it into intercultural competence” (Fengping Gao).

Fatiha Guessabi ([email protected]) is a professor of Languages and Translation in the Literature and Humanities faculty at the Université de Béchar in Algeria.