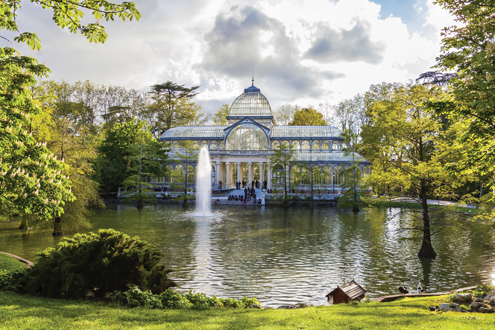 The economy is on the rebound, so there’s optimism but prices are still relatively low. And a positive aspect of the recession is that it has led the people of the country back to the roots of their culture.

Spain announced last month that it has retaken the number-three spot in world tourism in 2013, overtaking China by welcoming a record 60.6 million international visitors. Foreign tourist arrivals surged by 5.6% in the year, the government said, boosting the economy after a long recession.

“The new figures for 2013 allow our country to retake the number-three position in this indicator after having overtaken China,” Prime Minister Mariano Rajoy boasted.

Spain now stands behind only France, with 83 million international tourist arrivals, and the U.S., with 67 million, Rajoy said.

Income from foreign tourists hit record levels, too, a significant contribution to the Spanish economy, which has just emerged from five years of stop-start recession that left the nation with a 26% unemployment rate.

Spending by international tourists in the first eleven months of 2013 surged by 8.7% from the same period last year to 55.9 billion euros, government figures showed.

Even without the official figures for the whole year, it is already possible to say that 2013 was a record in terms of tourism spending, Rajoy said. The tourism industry accounted for 10.9% of Spain’s total economic output in 2012 and 11.9% of all jobs, the prime minister said. Its tourism industry association Exceltur predicts the industry will grow by 1.8% in 2014.

Spain’s economy emerged from a two-year downturn by posting 0.1% growth in the third quarter of 2013, and it expanded by 0.3% in the final quarter, Spain’s prime minister said.

Spain’s diversity makes it a cultural powerhouse. Size doesn’t hurt. It’s Western Europe’s second-largest country (after France) in terms of area, and the world’s third-largest exporter of wine, fruits, and vegetables. And it’s the incredible diversity of its people and passions that holds the key to understanding Spain’s eternal appeal.

After the dictator Francisco Franco’s death in 1975, a new, ultra-liberal constitution broke up centralism by handing over sweeping autonomy to the country’s 17 regions. The result was a reinvigorated sense of regional pride that had a ripple effect on every form of culture. Each region has its own distinctive personality and characteristics, which can be seen in monuments and cities, during festivities, and in traditions and gastronomy.

Spain’s Most Popular Regions for Spanish Immersion
Andalusia is a land of culture, history, fiestas, nature areas, and excellent food. Along with its outstanding monuments and wide variety of different natural landscapes, the region offers visitors the chance to take part in several unique popular events and sample a range of delicious gastronomic products. One way to discover the culture of Andalusia is by exploring the sites which have been awarded the UNESCO World Heritage designation. In Granada, there’s the Alhambra palace, the Generalife gardens, and the mediaeval Albaicín neighborhood; in Cordoba, its historic center with its great mosque; in Seville, the cathedral, the Alcázar palace, and the Indies Archive; and in Jaén, the monumental sites of Úbeda and Baeza. There are also festivals such as Easter Week, the Carnival in Cadiz, El Rocío pilgrimage in Huelva, and the April Fair in Seville. Landscapes range from the beaches of the Costa del Sol, Costa de la Luz, and Almería to the extensive olive groves of Jaén, as well as the Doñana National Park — also declared a World Heritage Site — and the snow-laden Sierra Nevada.

Castile-La Mancha is a land famous for its arts and crafts, for the unique monuments to be seen in its towns and cities, and for being the setting for the adventures of the famous literary hero Don Quixote of La Mancha. Any trip to this area in inland Spain should definitely include a visit to its World Heritage cities, such as Cuenca with its famous hanging houses and Toledo with its cathedral and Alcázar fortress. Some of the oldest examples of rock art in Spain can be found at Castile-La Mancha’s four archaeological parks, and the region is one of the territories in Europe with the largest number of officially designated nature reserves, nature areas, and national parks, including the Tablas de Daimiel and Cabañeros.

Castile-La Mancha hosts a wealth of traditional celebrations, including the Corpus Christi in Toledo, Easter Week in Cuenca, the Albacete Fair, and the Drum Festival in Hellín. And as befits a land of traditional customs, it also produces a variety of typical gastronomic products, such as honey from La Alcarria and marzipan from Toledo, as well as being home to numerous wineries where visitors can enjoy tasting a range of wines, including the world-renowned Valdepeñas.

Castile-León offers probably the greatest diversity of natural landscapes in Europe, as well as spectacular monuments and a varied and abundant gastronomy. It has a whole host of places well worth visiting, including towns like Avila, Salamanca, and Segovia (all three World Heritage cities) and unique attractions such as Burgos Cathedral and the Atapuerca archaeological site, which contains traces of the first settlers in Europe. The famous Way of Saint James also runs through the region and is one of the world’s most important pilgrim routes. There are nearly 40 protected natural spaces, such as the Picos de Europa National Park, with some of Spain’s finest Atlantic forests. All these areas are perfect for climbing, cycle touring, and kayaking.

The regional capital is the city of Valladolid, which is the setting for the Easter Week religious processions, declared of international tourist interest. The city also hosts a well-known film festival, the Seminci International Film Week. The province of Valladolid is also famous for being a land of castles. There are over 30 in total, including the castles of Peñafiel, Íscar, and Medina del Campo.

Each year, thousands of students come to Salamanca to learn Spanish, turning this city into a point of reference as far as language tourism is concerned.

Salamanca is a vibrant, friendly, dynamic, safe, and well-looked-after city. The prestige and tradition of its university, one of the oldest in Europe, along with its accredited teaching centers, make it the perfect destination to learn Spanish. It’s no coincidence, therefore, that the University of Salamanca is in charge of the DELE certification, an examination that is sat in over 50 countries and issued by the Spanish Ministry for Education.

Catalunya offers spectacular beaches in areas such as the Costa Brava, world-class gastronomy, and the works of famous artists such as Gaudí and Dalí. Culture abounds, from unique buildings in Barcelona (known as “the capital of Modernism”) like the Sagrada Familia Cathedral or the Palau de la Música Catalana auditorium to the outstanding archaeological site at Tarraco, the monastery of Poblet in Tarragona, the churches of the Boí valley in Lleida… all declared World Heritage sites by UNESCO. What’s more, visitors can opt to enjoy a whole range of events thanks to the programs of world-class museums like the National Art Museum of Catalonia and the Dalí Theatre-Museum in Figueres.

Visitors to this area in northeast Spain should also make a point of stopping off at the spectacular beaches of the Costa Dorada, Costa Barcelona, and Costa Brava, with such internationally renowned resorts as Salou, Sitges, Tossa de Mar, Cadaqués, Lloret de Mar, and Roses. Catalonia also has numerous marine resorts, and for outdoor types, there are the Catalan Pyrenees (with plenty of ski resorts) and the National Park of Aigüestortes i Estany de Sant Maurici.

Madrid is not only Spain’s capital city but also an autonomous region. The capital city is home to some of the most frequently visited museums in Spain, and its surroundings offer the chance to visit several outstanding monumental sites. The city of Madrid is open and welcoming, modern yet traditional, stately yet popular, lively yet peaceful… But more than anything else, it is a cultural paradise. It is home to what is known as the Triangle of Art, which contains within a limited area the Prado Museum, the Reina Sofía Art Center, and the Thyssen-Bornemisza Museum. Tourists can also visit such impressive monuments as the Royal Palace, explore places with their own particular charm like the Plaza Mayor square or the grand avenue known as the Gran Vía, or enjoy what is considered the most exciting nightlife in Spain… as well as wander in large green spaces such as El Retiro Park and drop in to typical bars and taverns to sample a range of delicious tapas. The surrounding Madrid region offers more, such as the cities of Aranjuez, Alcalá de Henares, and San Lorenzo de El Escorial, all of which have been declared World Heritage sites, or small picturesque towns such as Chinchón, and charming mountain villages.

Spain’s other regions are just as inviting, and each offers visitors its own, unique flavor.