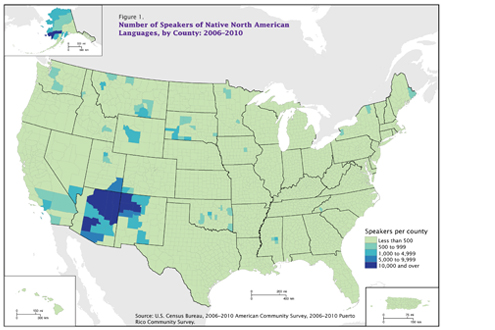 For the first time, the U.S. Census Bureau has compiled four years of data to see how many speakers of North American Native languages reside in the U.S., where they live across the country, and what languages they speak in order to better serve Native North American communities. The report, called Native North American Languages Spoken at Home in the United States and Puerto Rico: 2006 to 2010, is informed by the American Community Survey, which is a larger effort to provide communities with reliable and timely demographic, social, economic, and housing data every year. The Census Bureau counted about 372,000 people who speak Native North American languages at home.
The most common of these languages is Navajo, also known as Diné, with nearly 170,000 speakers, followed by Yupik and Dakota, each with about 19,000 speakers. Most Native North American language speakers are concentrated in Alaska, Arizona and New Mexico, with just nine counties from these three states containing half of the nation’s speakers. Apache County in Arizona has the most concentrated population of speakers with 37,000, while McKinley County in New Mexico has 33,000. Other states with significant numbers include South Dakota, California, Oklahoma, and Washington. The report does not include information on Native Hawaiians.

Sadly, the report shows a decreasing trend in indigenous language use. Among those who identified themselves as American Indian or Alaska Native, one in five people aged 65 and over spoke a Native North American language in their home compared with only one in ten of people aged between five and seventeen. The numbers suggest that younger generations are not learning heritage languages, which may lead to the extinction of some languages. The American Communities Survey currently codes 169 Native North American languages. Less than 20 of these languages have over 2000 speakers using the language at home.

Although the survey confirmed that many indigenous languages are dying around the country, the report’s very existence suggests that the federal government is trying to address the needs of Native North American communities. The statistics released will assist local leaders and policy makers as more action is taken to encourage the preservation of language and heritage. Some policies, such as the recently updated Native American Voting Assistance standards, will benefit from this report as voting officials previously lacked the supplemental information required to effectively assist voters who primarily speak Native North American languages.