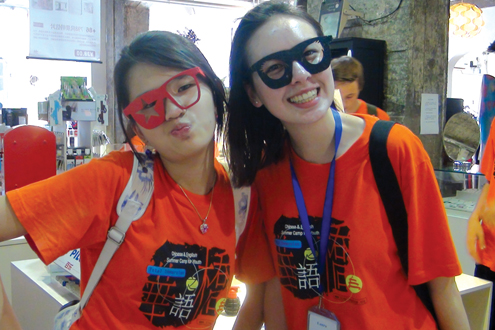 As demand for Chinese soars, so do the opportunities to learn it in its homeland

“Chinese language” refers to a number of mutually unintelligible but historically related languages (groups of dialects) spoken by the Hàn people of China and by Hàn in overseas Chinese communities, including Mandarin, Cantonese, Hakka, Wu, Min, Xiang, and Gan.

Because Chinese governments are concerned about exacerbating regional divisions, it is officially incorrect to describe any of these Hàn languages as independent languages (although they are that by any non-politicized definition), and accordingly they are conventionally called “dialects.” Each contains very considerable internal dialectical variation. Most are named after the present or past names of the places where they are spoken.

The most widespread Chinese language, known as Mandarin, is spoken in north, central, and west China. The Mandarin dialect of Beijing has for centuries been the language of government. The variety of Mandarin based on the speech in the capital, Beijing, is the official national language of mainland China. The de facto common language in Hong Kong and overseas Chinese communities is Cantonese. Amongst the official languages of Taiwan are Mandarin, Taiwanese, and Hakka.

Hàn Chinese represent about 92% of the total Chinese population. About two-thirds of the Hàn population speak a variant of Mandarin as their native tongue. A significant part of the Hàn population is therefore bilingual. Under these circumstances, Manda­rin is used as a second language for formal communication in government, media, and education. The primary mother tongue is used for the remaining occasions, such as entertainment and conversation at home or between friends and relatives.

All varieties of Chinese belong to the Sino-Tibetan family of languages. Members of the Sinitic family are typically tonal, meaning that different tones, or intonations, distinguish words that otherwise are pronounced identically. Chinese by origin is monosyllabic. The vocabulary of dialects more recent in the linguistic tree, such as Mandarin, tend to become more polysyllabic (compound words) as an adjustment to the loss of a number of sounds from ancient Chinese.

The word Mandarin comes from the Portuguese word mandarim, via Malay menteri from Sanskrit mantrin (“counselor”), from mantra (“counsel”). In the Chinese Empire, mandarin referred to a member of any of the nine senior grades of the bureaucracy, entered by examinations, and in modern English, it refers to a high-ranking official whose powers are extensive and thought to be outside political control, or a person of standing and influence, as in literary or intellectual circles.

Never before has there been such demand for Mandarin speakers, and there’s no better way to learn a language than amongst its people, so here’s a selection of programs in China:

Where There Be Dragons
From programs that focus on China’s economic development to programs that examine China’s ethnic diversity to courses designed around intensive language instruction, Dragons has a 21-year history of mapping out and delivering programs of exceptional quality and intimacy. No other organization has been in China as long as Dragons, with as many programs and with such a sustained presence.

Each Dragons China program is limited to twelve students and is staffed with three primary instructors as well as appropriate language staff. Dragons instructors are much more than chaperones: they are informed educators who teach — academically and experientially — about the history, culture, economy, arts, politics, and development issues of modern China. On language-intensive programs, professionally trained language instructors often provide one-on-one instruction for as many as four to six hours of teaching each day.

Sino Language Gateway
Based in the U.S. with a focus on China, SLG is a well-known, privately run Chinese summer camp provider which has been promoting two-way language and cultural exchanges between students of China and the U.S. since 2003. All SLG programs enable students to learn the local language and explore the country while ensuring that they have a thoroughly enjoyable experience that they will never forget.

Programs are the result of a long-term presence in both China and the U.S., close connections with the local society, and deep understanding of the intercultural, health, and safety issues inherent to studying in another country. They are designed to provide excellence in language study with ample opportunities to interact with local children and teens (shown pictured here), and to reflect on the intercultural encounters in structured settings.

Next Step China
Next Step China provides affordable and flexible programs to study Chinese in China either at a university or with highly qualified teachers.

With a thousand programs at over 200 universities, there are many options to choose from, with features such as fun weekend excursions, insurance, and accommodations. Programs start as low as $250.

For those who don’t like studying in a classroom, Next Step China’s Intensive Tutoring program is perfect, especially for students who want to make the most of their time learning Chinese as quickly as possible. Highly qualified teachers will develop custom lesson plans catered to interests and goals. They also offer HSK and IB, SAT and AP Chinese prep programs for university and high school students interested in passing these Chinese proficiency exams.
Next Step China, LLC was founded in 2008 and has been featured in the Wall Street Journal, USA Today, and Yahoo! It has also been recognized by the White House and the United Nations, so it is considered one of the leading study abroad providers in China.

Travel for Teens
For Mandarin teachers who yearn to go beyond the superficial trip to China while giving their students the chance to take their language classes into the real world, Travel for Teens (TFT) offers cultural exploration and language immersion programs in China with insider access. On these trips, a select team of local and international bilingual guides carefully crafts a cultural and linguistic immersion to give teens and teachers the experience of living life as locals instead of simply going to China to see the sights as an outsider and practice their Mandarin.
TFT’s philosophy is based on the understanding that a big part of language teaching motivation comes from intimate experiences as a traveler in a foreign country, from the ability to connect on a more meaningful level because of the ability to communicate in the native tongue. TFT aims to replicate those experiences to provide that feeling to students. Trips are built around seeing the best of China, from the world-famous Great Wall to the iconic Tiananmen Square and Forbidden City, and incorporate community service experiences with Chinese students and panda conservation projects. Home­stays can be risky, so students always stay in centrally located, locally owned hotels for safety reasons. Every day includes teen-friendly, culturally rich activities such as kung fu, cooking, and art lessons.

Intercultural Student Experience (ISE)
Teachers of Mandarin bring language to life when they travel to China with their students. ISE’s educational travel program to China immerses students in the language and culture while providing opportunities for them to engage with Chinese people and speak Mandarin. A local bilingual guide accompanies the group full time, providing valuable insights into culture and language. Visiting the Great Wall, Tiananmen Square, the Bund, and the Terracotta Army provides classic experiences. On top of that, students are inspired by the personal encounters they have. Students live with host families in Beijing, where they can enjoy a cooking lesson and play ping-pong with neighbors in the courtyard. In a rural village, a lesson in traditional farmers’ painting by the local artist himself evolves into a visit to his home. The canals of Suzhou are beautiful and lasting memories are made in an afternoon at a local school. Students stretch their language skills and catch a glimpse of real life in China’s most populous city when they dine with families at home in Shanghai.

University Studies Abroad Consortium (USAC)
USAC has provided affordable, valuable study abroad programs and contributed to the internationalization of universities in the U.S. and abroad for over 30 years, with programs located in 26 countries. They pride themselves on providing well-rounded, academically sound, credible programs in nontraditional locations or in unique parts of more traditional places.

In China, USAC programs are in Shanghai and Chengdu. Each offers summer, semester, or year programs and a range of courses to choose from, plus small class sizes, a multitude of disciplines taught in English, and Chinese language study available at any level of proficiency from beginning to advanced, with no language prerequisite. Students have the option of intensive language study, where they can earn up to two years’ worth of credit in one semester.
USAC’s mission is to provide students with the opportunity to develop the knowledge, skills, and attitudes to succeed in the global society of the 21st century. They strive to provide an authentic, quality context in which students may grow into engaged citizens of the world, not only in the classroom but also through fieldtrips, integrated living and academic experiences, sports, internships, and volunteer opportunities.

iMandarin
With ten years of experience and more than 20 campuses across the country, iMandarin is one of the leading Chinese language providers in China. iMandarin is an affiliate of NeWorld Education and is publishing its own learning manuals to match students’ expectations. They offer a full range of services, group classes, one-to-one classes, cultural classes, Skype lessons, and summer camps for all ages, levels, and backgrounds. They offer lessons in Chinese languages, English, Japanese, Korean, Thai, German, and French. Free placement tests and demo classes are available.

EF Beijing
EF Beijing offers a great setting not only for studying Mandarin but for experiencing the rich culture of the city and country through using the language in real-world situations, from basic conversation to shopping in a Chinese marketplace to exploring the amazing architecture of the city. EF was named the Beijing 2008 Olympic Games official Language Training Service Supplier, training 5,000 Chinese citizens, including members of the Olympic Committee, judges, and volunteers. The school is a bridge, allowing students to get to know the people behind the language.
The school welcomes students of all ages from every corner of the world, and the curriculum uses an intensively structured academic program along with an array of educational and social activities, creating a fast and interesting methodology. All teachers are highly qualified and are certified with professional designations and high academic achievement. Their new school offers modern facilities with the latest in language-learning technology combined with fun activities arranged by the school.

In Beijing, students live with Chinese homestay families in high-end apartments or with Chinese university students in shared apartments while studying at the campus in small groups (max. seven) or one on one.

The Chengde Chinese Immersion Program takes students first to Beijing to settle into China and then on to Chengde, China’s old summer capital. A small city of 450,000 with no traffic and clear skies, it is located in the mountains two hours north of Beijing and is known for its clear pronunciation of standard Mandarin. The city has almost no foreign population. Living with a host family, students speak, learn, and dream Mandarin 24/7.

LTL only employs full-time, professional Mandarin teachers with a BS or MS in teaching Chinese as a foreign language.

China Travel and Tour (CTT)
CTT specializes in providing travel planning and logistics services for educational tours in China. Whether it is for a school cultural tour, a language immersion, a service learning project, or a combination thereof, CTT’s tour coverage is comprehensive enough to meet the varied needs of its clients.

CTT’s K-12 services include: trip organizing advice and assistance, a vast array of travel logistics support, monthly emails informing our clients on K-12 travel topics in China, and assistance in setting up additional educational content, such as homestays and service learning projects.

The entire staff at CTT is bilingual in Mandarin and English and based in the U.S. and China. The staff members not only are experts on China but also have a deep understanding of the goals and content of K-12 language curricula (the company marketing director holds a master’s in teaching Mandarin from New York University).