Confessions of a Hyperpolyglot 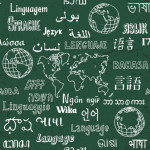 Timothy Doner has been referred to “The World’s Youngest Hyperolyglot” by various media outlets, and has been interviewed on his passion for words and languages by the BBC and The New York Times. Beginning with a casual interest in Hebrew, Doner eventually became enraptured with languages, using grammar books, iPhone applications, and online communities to further pursue his interests. He now speaks over 20 languages at the age of 16. However, as his public polyglot reputation solidifies, Doner struggles with the definition of fluency, and the question of whether his language skills hold up to the hype. In a recent Ted Talk, Doner says he, “realized that you can be nominally fluent in a language and still struggle to understand parts of it. If the standard of speaking a language is to know every word — to feel equally at home debating nuclear fission and classical music —then hardly anyone is fluent in their own native tongues.”

Doner was excited to promote language learning with his media attention, but eventually began to feel less of an advocate for foreign language learning than an entertaining circus act. “Reducing someone to the number of languages he or she speaks trivializes the immense power that language imparts.” Doner said, “After all, language is the living testament to a culture’s history and world view, not a shiny trophy to be dusted off for someone’s self-aggrandizement.” Doner’s goal for the moment is not fluency, but to learn the basics of as many languages as possible while his brain is still pliable; “While I’ve come to realize I’ll never be fluent in 20 languages, I’ve also understood that language is about being able to converse with people, to see beyond cultural boundaries and find a shared humanity. And that’s a lesson well worth learning.”