Choosing a Candidate Who Can 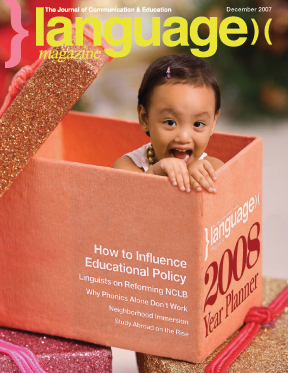 The political and economic landscape has changed dramatically since the beginning of the year. Last December, we were tentatively anticipating the effect that the new Democratic- controlled Con-gress would have on education policy, and the economy was booming with Wall Street breaking records by the day.

Now, we are moving into a presidential election year without consensus on the reauthorization of the No Child Left Behind Act, amid signs of a serious recession with an impotent dollar that looks set to continue its decline.
Prospective presidential candidates have finally begun to answer questions on education (see Parties Divide on Bilingual Education, News, page 11), however they have been reticent to comment on NCLB. Even Democratic hopeful John Edwards, who claims to be the only candidate with a comprehensive education policy, has generalized in his plans to overhaul NCLB, supporting “better tests, broader measures of school success, and more flexibility,” although he has endorsed universal preschool for four-year olds, raising teacher pay, and supports a plan to make college education affordable for all.

Among the remaining Democrat frontrunners, Barack Obama has issued a 15-page education plan which outlines plans to improve assessments and accountability under NCLB but provides little detail. He does describe in some depth his plans to recruit, reward and retain “effective” teachers, invest in early childhood education and support at-risk students. Although Hillary Clinton has not issued an actual education plan, she has committed to “attracting and supporting more outstanding teachers and principals, and paying them like the professionals they are,” reforming NCLB, and increasing access to high-quality early education.

On the other side of the aisle, Rudy Giuliani has based his education policy on parental choice and the creation of more charter schools, which is also supported by his Republican rival Mike Huckerbee who would like to see the establishment of “a clear distinction between the federal role in assisting and empowering states and in usurping the right of states to carry out the education programs for their students,” testing teachers to allow for pay increases for top performers, and replacement of poorly performing teachers, while encouraging children to be more creative. Third in current polls, Senator Fred Thompson believes that “the federal role in education is too intrusive and too bureaucratic, and has become part of the problem,” and is also an advocate for parental choice, voucher programs and charter schools.

Of course, constitutionally, education is the responsibility of states and not the federal government, but the economic downturn will mean that states need all the help they can get to fund their education systems. Already, despite improving its financial picture in recent years, California’s slowdown in state revenues has resulted in a $10 billion deficit which could result in the state having to make politically difficult budget decisions.

Even if we enter a full-blown recession, we cannot afford to cut our investment in education as it is our only safeguard against future economic downturns, so we need to be sure that our presidential candidates will be brave enough to do what it takes to provide all children with a quality education, even if it means doing the unmentionable, and raising taxes.

Reforming No Child Left Behind
As this contentious legislation is considered for renewal, Language Magazine asks key figures in the field of language and literacy acquisition to briefly explain what one change/addition/omission
they would make to the revised NCLB Act

Reading First: What is There to Comprehend?
John Gilbert argues that the focus on phonics is misguided

Closing the Divide Between Policy and Practice
Ron L. Rapp tells educators how their experience and knowledge can be leveraged to influence policy