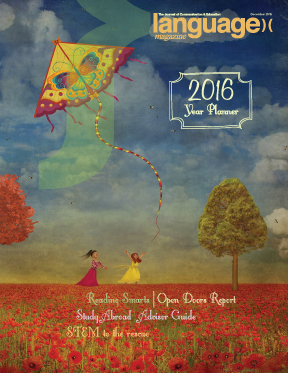 As more and more evidence emerges to support the assertion that learning another language improves cognition, earning potential, and health—and may even make people happier—there seems to be no rational argument for anglophone countries to persist in their policy of denying children the opportunity to learn languages other than English.
The recent tragedies in Paris, Beirut, and San Bernardino underscore the reality that we live in a global society where we cannot afford to remain ignorant of the complexities of other cultures. Isolationism is no longer an option. Improved communications and transport mean that people, goods, information, and money can flow through borders with ease. Building physical barriers will only slow the efforts of the most marginalized immigrants seeking a better life and will have little or no impact on security.

Our businesses operate internationally, and our standard of living is dependent on the intricacies of global trade. English may be the most useful of international languages, but even if one doesn’t plan to use a second language, the benefits of acquiring another language far outweigh the effort of doing so. There is no downside, and there’s even an argument that English speakers are being discriminated against by not having the opportunity to learn languages—but, luckily, we’re at a stage of globalization where multilingualism is a marketable asset.

Very recently, the London-based Financial Times published an article entitled “Rise of the Multilingual Boss Creates a Monoglot Ceiling,” in which columnist Andrew Hill argues that “having another language can aid your brain and not having one can hurt your promotion chances.” In the article, Hill quotes Richard Hardie, London chair of UBS (the Swiss financial services company with offices in 50 countries) and head of the British Academy’s Born Global steering committee: “We are being told that there’s a ‘glass ceiling’ developing for monoglots within global businesses.” Staff will not get into “the more rarefied atmosphere” of the senior ranks unless they have “overseas experience, cultural awareness, and probably [another] language.”

Nearly every month, Language Magazine reports on the findings of at least one new study that adds to the vast pool of research extolling the benefits of multilingualism. But even without this evidence, the fact that languages are considered an essential aspect of an elite education should indicate their importance for all of us. In the U.S., dual-language programs are proliferating in affluent communities, world languages have been part of the elementary curriculum in private schools for decades, and most universities require some form of second-language proficiency, even in the English-speaking world—but language education should not be the preserve of the privileged few.

That being said, progress is being made to improve the availability of dual-language immersion programs at the elementary level in less affluent communities to serve speakers of languages other than English and their English-speaking peers. However, they remain the exception, and there are even fewer options after elementary school while world language education at traditional elementary and middle schools is a rare treat.

No matter what is done to improve the availability of second-language education, we’ll face an uphill struggle unless we change the perception that majority-language speakers, monolingual English speakers for the most part, have of other languages and their speakers.

The decline of world language education in anglophone countries perpetuates the myth that English is somehow superior to other languages. In Greek tragedies, hubris was the arrogance that led to self-destruction. Let’s learn to overcome our fear of the unknown, embrace our new international society, and accept that English is just one of the languages that we should learn.

Open Doors Report More students than ever are U.S.-bound to learn

Toward Biliteracy: Spanish and Californian Trajectories As demands grow for biliteracy in California, Cynthia García Dehbozorgi and Nehemias Giménez García compare the state’s initiatives to those of Spain

STEM in a Chaotic Classroom Lydia Withrow uses a CSI-themed project, creating a mock crime scene to incorporate STEM into her English curriculum

Last Writes Richard Lederer with a Dog’s ‘Night Before Christmas’