Dyslexia and the English Learner Dilemma 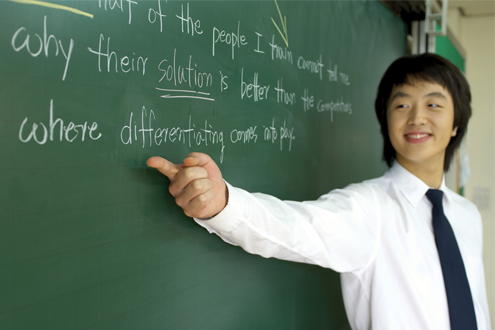 The American educational system has a difficult time understanding dyslexia and an even harder time identifying children with dyslexia in order to provide the correct intervention for students who are native English speakers. When a school has the added challenge of identifying struggling English language learners (ELLs), the task becomes an even more complicated process, and often, these kids are completely missed. But that does not have to be the case. Children who are learning English are just as likely to have dyslexia as their native-English-speaking counterparts, and there is a way to identify dyslexia in these children. The difference is that dyslexia might appear in the native language quite as vividly as it will when they attempt to learn English.

But before we can begin the conversation about how dyslexia affects those students who are English language learners, we have to agree that dyslexia is real and that it really affects up to 20% of the population of those who read English; that’s one in five people (Shaywitz, 2005). However, Snowling (2000) suggested that when the language is more transparent than English, such as Spanish, Finnish, and German, that number decreases to about 5%. Therefore, when we broaden the discussion to include the ELL, we must remember that dyslexia is a human condition that is not bound by country, it has no language borders, and it can affect anyone attempting to decode a printed alphabetic language (and probably a logographic language as well). It is still worth establishing that dyslexia is not a result of laziness, lack of motivation, or socioeconomic advantage or disadvantage. Contrary to popular belief and the rampant misinformation distributed, dyslexia is not a visual problem, even though it may present itself that way when students appear to be transposing letters like b, d, p, and q. The fact is that students with dyslexia see letters and words the same way those of us without dyslexia do. This brings us to the definition of dyslexia. The International Dyslexia Association (IDA) and the National Institute of Child Health and Human Development (NICHD) publish the following definition:

Dyslexia is a specific learning disability that is neurological in origin. It is characterized by difficulties with accurate and/or fluent word recognition and by poor spelling and decoding abilities. These difficulties typically result from a deficit in the phonological component of language that is often unexpected in relation to other cognitive abilities and the provision of effective classroom instruction. Secondary consequences may include problems in reading comprehension and reduced reading experience that can impede the growth of vocabulary and background knowledge (2002).

Ask the average person on the street what dyslexia is, and you will get a plethora of incorrect and absurd responses. In order to begin to understand what it might be like to have dyslexia, take a moment to read the following sentence:

How was that? Frustrating? Slow? What were those two sentences about? Don’t know? Why not? Did your difficulty understanding that sentence have anything to do with your intelligence? When most people think of dyslexia, they think of people seeing letters and words backwards; like seeing b as d and d as b. But despite a great amount of effort and intellectual capability, dyslexic people experience the slow, laborious pace you just experienced, yet they experience it every time they read. They are not only highly motivated, but very adept at adapting and accommodating their dyslexia in brilliant ways. Dyslexia is a phonological processing problem that is neurobiological and makes it difficult to decode words accurately and fluently, as well as making spelling very difficult. Dyslexia is highly genetic and occurs on a continuum from mild to severe. People with dyslexia have the ability to learn to read, they just need to be taught the way they learn, and they require accommodations to succeed via other learning modalities, such as the audio presentation of information.

Dyslexia affects humans, not English readers, and this means that students in classrooms who are struggling to learn English may be at risk for dyslexia. More often than not, these students may be missed, because it is assumed that because the English language is complicated and opaque, the student is having difficulty learning it but will eventually get it. This is erroneous. While English is not as transparent as Spanish or German, it is not the language that is causing the struggle. It is the dyslexia. There are ways to determine if the student is having difficulty due to dyslexia.

The answer lies in the students’ abilities in their native languages and the investigation should begin there. The first step is to determine if dyslexia is a possibility, so the students’ ability to verbally manipulate the sounds in their native languages, otherwise known as phonemic awareness, must be assessed. Brown (2008) suggested that students with below-average phonemic awareness in their native languages will have difficulty learning a new language. If the student is not literate in his native language, he can still be tested for phonemic awareness. Secondly, the reading fluency and spelling of those students whose native languages are a transparent languages, such as Spanish, need to be assessed. Fluency and orthography issues are red flags for dyslexia. This is in contrast to those native English speakers who are usually identified by their difficulty in decoding new and unfamiliar words, but this difficulty is a better predictor of reading difficulties in English, because it is an opaque language. So those students who have transparent native languages will have less difficulty sounding out words, because the languages are predictable; therefore, when the fluency is low in the native language, there is a problem with reading. Third, rapid automatic naming or RAN is a predictor of reading difficulties in ELLs (Frith, Wimmer, & Landeri, 1998) and should be part of the assessment. RAN tests the students’ ability to rapidly name items, letters, or numbers that are presented to them visually. Lastly, dyslexia is highly genetic, so, if possible and relevant, the family’s history of reading success should be surveyed.

This is the neat and tidy version of how to determine if an ELL student has dyslexia. Of course, identification of dyslexia in an ELL is a complicated procedure. Many factors need to be ruled out. For example, the lack of opportunity to learn in native languages or the lack of home support in learning English needs to be investigated. Also, does the child have the intellectual capability to learn to read at the same rate as her peers? Although it can be tricky to identify dyslexia in the ELL children, the intervention they should receive has the potential to help any child who is struggling with reading.

Ortiz et al (2002) reported that ELL students who are struggling to learn English and have some foundation in reading in their native language should receive direct instruction that includes speech perception, phoneme awareness, and sound-symbol connections. This is very similar to the Orton-Gillingham approach that is recommended as the intervention for English readers who have dyslexia. Literacy in the students’ initial language is really the key to helping them attain English, especially with dyslexia present. This might be seen as an insurmountable burden to a school system in which children speak a multitude of languages, but it is the most appropriate way to remediate the reading issue. However, in districts where there is a high concentration of one language, this is a very plausible solution. This strong foundation in their native language will translate into their English learning. McCardle et al (2005) reported that ELLs with reading disabilities were identified far later than their English-only peers, and this greatly impacts their ability to achieve their potential.

Dyslexia and the ELL student is a very complex topic and creates a conundrum for educators. While the best way to identify and intervene seems completely financially and logistically implausible, simply on the basis of the number of languages spoken in any single school district, it is how to help the ELL who is dyslexic. The good news is that once a students master their native language, they will be able to achieve literacy in English, but we can’t fail to see that those who are struggling with English might have a legitimate learning disability, like dyslexia, and might need an appropriate remediation in order to give them a fair chance. It is far too easy to allow these kids in particular to fall through the cracks.

Dr. Kelli Sandman-Hurley, co-founder of the Dyslexia Training Institute, received her doctorate in literacy with a specialization in reading and dyslexia from San Diego State University and the University of San Diego. She is a trained special education advocate assisting families through the Individual Education Plan (IEP) and 504 Plan process. An adjunct professor of reading, she is also past president of the San Diego branch of the International Dyslexia Association.