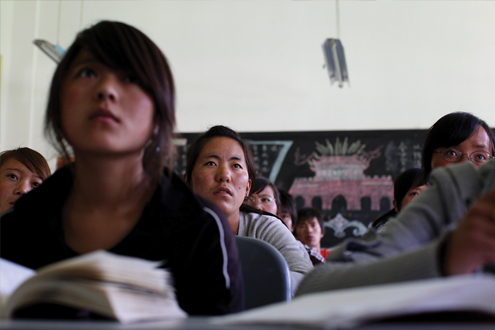 While listening to the radio the other day, I heard someone talking about President Obama and his speech on an “empathy deficit.” He spoke of how this empathy deficit is even more important than the federal deficit, and how we need to put ourselves in the shoes of others in order to empathize with them. I agree with him completely, but it’s one thing to believe it and another thing to actually do it.

A related conversation took place in my AP Spanish class during a unit framed around how science is prolonging life and allowing some people to live better and longer than others. I suggested we should share resources with everyone and that an underprivileged child with leukemia would deserves the same treatment as one from an affluent family. More than half the class disagreed and called that communism. This surprised me, since so many students in this community are involved in public service and helping others. Is this empathy deficit the fault of our educational system?

Who is in charge of teaching empathy? I know that English departments touch on universal themes such as racism, and social studies focuses on the impact of historical events that have had great effects on mankind. Could it be that much of the responsibility falls on to world-language instructors to teach empathy through studies of cultural awareness?

When working on my master’s degree in culture, a colleague suggested I read what she considered to be “the bible of culture” — Culture at Core, by Dale L. Lange and R. Michael Paige. In it, I found a path for teaching in a new dimension. I was engrossed in the descriptions of “products,” “practices,” and “perspectives” of culture, and I have been an advocate for these concepts ever since. I worked to incorporate these into the cultural learning experiences for all my Spanish classes. I blended them with the five Cs from ACTFL and created a few curricula heavy in culture that consisted of mini-dramas, cultural journals, and cultural studies shaped in inquiry-based research projects. For a while, I felt like we were making progress, but lately I feel that there is still something missing, as if the three Ps are losing their meaning over time.

I notice this lack of understanding and consideration of the three Ps when students are surfing the internet for cultural information. The wonder and beauty of internet is that you can go wherever you want in just a second. The internet brings countries and people from all around the world together like a cultural Pangaea, but it is also causing adolescents to drift away from the reality of the tridimensional aspects of culture (products, practices, and perspectives) and their meaning and interactions. Even though students can find cultural information faster and better than we can provide it, that doesn’t mean that they are developing empathy for those cultures. Too often, I see students either behaving like drones online — focusing only on accessing targeted information without much depth of thought — or even worse, being misguided by stereotypes or inaccurate interpretations of reality and missing the right targets. I like to compare the access to cultural information online to eating in a fast food restaurant: people eat fast and cheap, but is it nutritious?

I used to believe that our mission as world language teachers was to prepare the students to be cultural bridges between their parents and other people in the nation, regardless of their backgrounds. There was a big gap between their understanding of culture and their parents’ view of culture. I have redefined what I believe our role to be: cultural educators. We need to train students to better navigate the cultural terrain of the internet and the daily cultural experience of their professional and personal lives, and now is the perfect time to begin.

A good starting place would be to examine Professor Bennett’s Developmental Model of Intercultural Sensitivity (DMIS). ACTFL recognizes how important it is to identify and appreciate cultural differences, but this model aims to develop general strategies for adapting to cultural differences. “Intercultural trainers have examined the multiple ways in which culture can be taught. Faced with the real-world problem of preparing people as diverse in their needs as Peace Corps volunteers, business professionals, international students, and career diplomats to function quickly and effectively in cultures other than their own, trainers have developed instructional designs which have been tested and become increasingly more refined during the past 30 years” (Smith et al 90).

So how can we teach our students to read cultural clues in a given situation and adapt? Often curricula and textbooks contain bits and pieces of cultural information as isolated facts. We need to move toward teaching more of a process that students can apply in any cultural situation. We have made great progress from the times of the Frankenstein approach (“a taco from here, a flamenco dancer from there…”), the four-F approach (“folk dances, festivals, fairs, and food”), the tour guide approach (“the identification of monuments, rivers, and cities”), and the by-the-way approach (“sporadic lectures or bits of behavior selected”) (Omaggio 348). We have come a long way from teachers lecturing and showing how much they know about a theme. We now have students developing questions and working on inquiry projects; they are in charge of their learning. We even collaborate with other schools from other districts and countries. Some schools even offer students the opportunity to travel to other countries. And yet, are we truly teaching the cultural skills necessary for a more empathetic nation and better-prepared young adults for the job market?

If we examine culture in authentic situations such as the Special Forces, we see that people are specifically trained. In Dec. 2011, JSOP (Joint Special Operations University) released a report called Cultural and Linguistic Skills Acquisition for Special Forces which stated, “Particularly because of lessons learned in Afghanistan and Iraq, the requirement for cultural knowledge for military operations has been actively promoted by defense policymakers and military leaders” (6). In addition, the “Cultural Understanding and Language Proficiency” analysis proclaims, “lessons from recent and current operations reflect consensus that culture and foreign-language competencies for many military personnel are more than important — they are necessary for mission accomplishment” (Howard 3).

When we see how rigorous the cultural training is for the Peace Corps, we realize that simply touching on products, practices, and perspectives is not enough to change the sensibility of a nation. As argued in the workbook Culture Matters, “In the cross-cultural context, communication, like everything else, is more complicated. It’s almost impossible to send a message that does not have at least some cultural content, whether it’s in the words themselves, in the way they are said, or in the nonverbal signals that accompany them. And even if it were possible to send a message without any cultural content, it’s not possible to receive one without passing it through the filter of one’s own cultural conditioning. All of which means that host-country people may not interpret everything you say the way you meant it. And vice versa” (75).

There are places such as Intercultural Communication Institute (ICI) and many others that do a wonderful job training people in culture. How can we integrate this type of training into our regular curriculum for all students throughout their schooling? Why don’t books and college courses provide learning practices from places such as AFS (Archives of the American Field Service and AFS Intercultural Programs) like chain-of-diversity lessons, Barnga games, and lessons called “What do you know and what have you heard?”

We need to provide cultural knowledge and the language practice that will allow students to compete with other students from around the world. We cannot wait to begin in college. This education needs to start in middle school. We should teach students how to interpret the cultural information online, to be negotiators, to act like diplomats or peacemakers, or just to be more empathetic toward other people. I have often thought that we should restructure our studies of world language. What if instead of teaching Spanish I, II, III, and IV, we taught Spanish for business, Spanish for public services, Spanish for traveling, and Spanish for medical professionals. For example, in an unit in Spanish for business, students could study the culture of Puerto Rico or Mexico (products, practices, and perspectives), and then they could design proposals for creating companies and selling products and work with other departments and local companies. If we provided the right language and understanding of the cultural context, communication would happen.

What has really called my attention over my short teaching career is how other departments have been evolving into more useful and recognized courses. I have noticed how technology education is an important department that prepares students for higher education and the workplace. I see how health and physical education have evolved into studies of how to make good choices for a healthy life. The arts not only teach students to express themselves, but also to be creative and perform. Each subject is evolving to include more useful skills. Where are we in this evolution?

This is the moment for us to reinvent ourselves, to refocus what we do and how we do it. There is a gap, the cultural gap. Let’s not take just a piece of the cake. Let’s take it all. Let’s be in charge of teaching real culture in this country. Let’s take the right way, even though that will push us out of our comfort zones.

It is the time for world language teachers to fill the cultural deficit of this nation. As Bolewski stated in his cultural training for diplomats, “Intercultural sensitivity within groups paves the way for the acceptance and tolerance of other cultures and allows members to be open to values which are universal among all groups, such as law and justice, which globalized society should then build upon together” (145).

Juan José Vázquez-Caballero is a high school Spanish teacher in Connecticut. He was selected as the teacher of the year in his district. He has an MA in Spanish from Central Connecticut State University, where he received the Graduate Studies Departmental Academic Award.