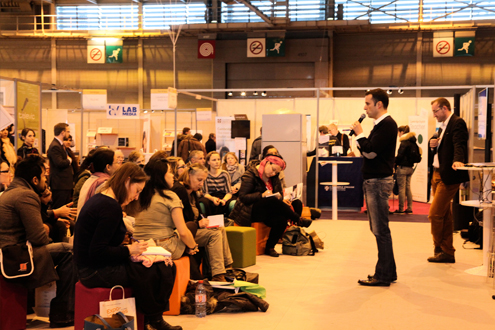 Athina Kontos and Ben Glister re-ignite their passion for language

Paris was the place to be for language lovers this month as the annual Expolangues expo in Paris welcomed thousands of visitors from France and overseas. Now in its 32nd year, the four-day event, organized by French newspaper L’Etudiant, featured over 150 exhibitors, speakers, and performers, all celebrating and promoting world language education.

Day one was reserved for professionals only, providing networking opportunities for translators, teachers, and language organizations; in addition to exclusive seminars and workshops. A primary focus of this year’s expo was the promotion of language education in the digital age; presenting apps, gadgets and language software tools tailored to the needs of teachers and educational establishments worldwide.

However, aside from the promotion of logistical aids and resources, there was of course a deeper message in continuing to support an enthusiasm for future language education. Whether this manifested itself in vibrant performances from the Thailand Institute or interactive Italian-medium pasta making workshops by Farine00; all contributors provided an enriching sense of passion and devotion for language learning, travel and cultural diversity.

In recent years, many English-speaking nations have faced criticism over their attitudes and proficiencies in world-language learning. Events such as Expolangues continue to support and facilitate teaching and learning opportunities for all nations, including Anglophone nations struggling with education issues such as the current language “crisis” in the UK.

Events like Expolangues are helping to expose the challenges faced in world language education as they arise: Jennifer McEntee from International House Dublin explained that similarly to the UK, Ireland faces resistance to language learning “Unfortunately, Irish people in general do not have an interest in learning foreign languages, there are some of us, but we are few and far between”. Building partnerships with countries such as Brazil, Korea, and Saudi Arabia in English-speaking environments continues to provide monolingual British and Irish students with valuable exposure to foreign languages “…a lot of our students can stay with host families and that really helps them…a lot of the students stay in touch with their host families – we’ve had quite a lot of student weddings!”.

Nadia Redman from the University of Delaware English Language Institute reminded us that language learning is as much about fruitful, cultural experiences as it is grammar and classroom study: “…let’s say we have a group from Japan, they’ll take their American culture courses and we’ll also take them to New York, D.C. and Philadelphia”. Similarly to International House Dublin, the Uni. Delaware English Language Institute offer host family placements “…a lot of the time students look for that type of accommodation; we have a very big homestay program”. Redman adds that it is the combination between social and educational environments that provides the most culturally rich experience.

Many exhibitors were not just there to promote their products. Much like London’s Language Show Live, Expolangues showcased language movements aiming to rise above educational politics and re-ignite raw passion for language learning. A good example was the colorful and joyous Esperanto France, an organization promoting worldwide awareness of the Esperanto language. Esperanto, dubbed ‘The Universal Language’ was created by L.L. Zamenhof in 1887 to combat existing debates over a global lingua franca. Lexo-grammatically, Esperanto includes constructs from numerous Indo-European languages with aims to “…be spoken by everyone, but belong to no one” as suggested by Monique Arnaud of Esperanto France. Over 125 years after its creation, English, Spanish, and Mandarin lead as global lingua francas, yet many efforts are being made to protect, promote and revitalize Esperanto. Hungary has been the first country to institutionalize Esperanto, promoting its title from ‘foreign language’ to ‘optional second language’ for the first time since its creation. Talks are currently being held to re-introduce Esperanto into schools and universities; and with the help of initiatives like Esperanto France, there are high hopes for the future “A few years ago it was taught in six universities in France, but the teachers became older and there was no one to replace them…we are trying to propose Esperanto as a language option for the International Baccalaureate”. Although still an unknown language to many, the message of Esperanto is clear – “Esperanto is a language which helps us to protect diversity,” claims Arnaud.

Beyond education, the vibrant atmosphere of Expolangues offers visitors the opportunity to experience extreme cultural diversity under one roof. As affirmed by all of the week’s exhibitors, events like this remain vital in uniting different linguistic communities, regardless of socio-economic or political struggles. In doing so, we are able to breathe new life into endangered languages and continue to facilitate language learning for the next generation.