Fear and Loathing on the Acquisition Trail 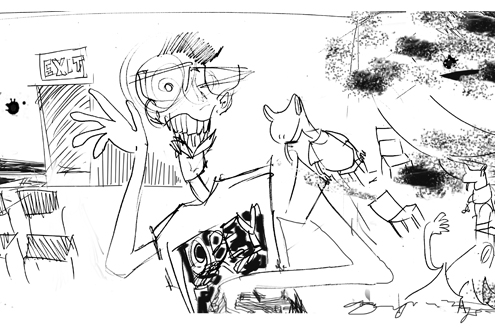 I start to get anxious on my way driving here. On my way here, I start feeling sick to my stomach… because there is a level of nervousness in my other class, but I find that in Portuguese it is to the point that I feel paralyzed.

Among all of the feelings learners experience in a second-language classroom, apprehension, nervousness, and language anxiety are often voiced as feelings that not only hinder interaction but also prevent learners from attempting to communicate using the target language. These feelings can have detrimental effects on language acquisition — a very intricate process that involves interrelated elements such as input, situational factors, and individual differences. Of all individual differences, anxiety has been considered one of the most destructive on the acquisition of a second language (Arnold, 1999; Gardner & MacIntyre, 1994; Horwitz et al. 1986).

Several studies have attempted to explain the impact of anxiety on the acquisition of a second language, its effect on final grades and receiving feedback, and its consequences for in-classroom anxiety levels (e.g., Cheng, 2002; Cheng et al,, 1999; Dally & Miller, 1975; Koch & Terrell, 1991; MacIntyre et al., 1995). Studies on language anxiety among Portuguese learners demonstrated that being in a classroom with counterparts with different linguistic backgrounds (e.g. Spanish speakers) or prior experience with Portuguese (e.g., heritage learners of Portuguese), types of assessment, feedback, and the learners’ linguistic profiles correlated to levels of language anxiety (Gontijo, 2012, 2013; Gontijo & Silva, 2013). However, these studies have focused on investigating anxiety at the output stage. By taking previous studies one step further, this study considers the subtle effects of second-language anxiety by assessing anxiety during each stage of acquisition — input, processing, and output — in the hope of providing practical suggestions to language teachers and for future research.

Theoretical Background
The model of anxiety and its effect on attention control, cognition, and performance are crucial in understanding the implications language anxiety has on language learning and learners. There is ample support (e.g., Bishop et al., 2004; Eysenck et al., 2007) for the notion that anxiety disrupts the functioning of the goal-directed attentional system, producing several effects, including: (a) a reduction in the ability to inhibit incorrect responses, (b) susceptibility to distraction, (c) impairment of performance on secondary tasks in dual-task situations, and (d) decreased task-switching performance.

In 1986, Horwitz, Horwitz, and Cope clarified that second language anxiety was not limited to the learner’s lack of attention, transference of fears of communicating in public, exam-taking, or their inability to inhibit inadequate language use. Rather, they conceived second-language anxiety as a distinct, complex system of self-perceptions, beliefs, feelings, and behaviors related to classroom language learning. Since the main goal of the second-language learner is to use the target language to communicate, the fears of being evaluated negatively, of communicating, and of testing poorly are important elements in the construct of second-language anxiety. Second language communication is essentially a risk-taking task, which challenges an individual’s self-conception as a competent communicator.

Earlier, some studies (e.g., Sarason, 1972; Wine, 1971) conjectured that there are three possible points that can be more strongly affected by anxiety during the learning process: (a) preprocessing, (b) during processing, and (c) right after processing and just before output. Tobias (1979, 1980, 1986) contended that anxious people tend to engage in self-directed, deprecating cognition rather than focusing on the task itself. These task-irrelevant thoughts compete with task-relevant ones for limited cognitive resources. On the one hand, non-anxious individuals tend not to engage in such self-preoccupations. On the other hand, for anxious individuals, interference of task-irrelevant thoughts can occur in all three stages of language acquisition. If interference occurs during input, minimal information is registered. Disturbance in the processing stage depends on the task’s difficulty level. As the task becomes more difficult, anxiety shows a greater impact on processing. At the output phase, anxiety can obstruct the retrieval of previously learned information.

By considering Tobias’s explanations for how anxiety hinders language acquisition, this study aims to contribute to the larger discussion on the effects of language-learning anxiety by investigating which stages (input, processing, and output) of the language-learning process were primarily affected by anxiety, as well as examining the relationship between the learners’ experiences and levels of anxiety. To examine anxiety among learners of Portuguese, this research posed the following questions:

1. Among learners of Portuguese, which stage of the language-learning process (input, processing, and output) is primarily affected by language anxiety?

2. Do levels of language anxiety decrease over time?

Methodology
This study used quantitative and qualitative research methods. The present article is part of a longitudinal study — the first set of data was collected at the beginning of the semester and the second set at the end. Data were collected by means of questionnaire. An adapted version of the FLCAS (Foreign Language Classroom Anxiety Scale, Horwitz et al., 1986) was used to measure the learners’ classroom anxiety. Students answered the same 33 questions from the FLCAS during the two phases of this study; the highest possible score was set at 165 and the lowest at 33. To measure anxiety in each stage of language acquisition, learners were asked to rate a total of 18 statements (six for each stage of acquisition) describing anxiety during input, processing, and output (see MacIntyre & Gardner, 1989).

Results
The participants comprised 134 college students enrolled in Portuguese courses in six universities across the U.S. Regarding level of instruction, 61.9% (N=83) of the participants were enrolled in elementary Portuguese (first or second semester) and about 24.6% (N=33) of the learners were registered in intermediate Portuguese (third or fourth semester). Learners who were matriculated in advanced courses represented the smallest group of participants, 13.4% (N=18).
The anxiety scores obtained through the FLCAS were indicators used to answer the research questions. The statistical results showed that the mean score of anxiety for the whole group of participants was 90.9 (SD=24.74) in the first phase of this study and 89.0 (24.6) for the second phase, with significant difference (p<.0001)1 between samples. The levels of anxiety for each stage of language acquisition were obtained through the adapted version of the instrument proposed by MacIntyre & Gardner (1991). The sum and comparison of mean scores for each phase of language acquisition allow us to conclude that, in the first phase of this study, learners were more anxious during input and less anxious during processing. These findings suggest that the ability to listen and comprehend is possibly the most affected among these learners. Additionally, it might contradict what prior studies (e.g., Price, 1991) and participants of this study typically recognized as the major source of anxiety: speaking (output). A different paradigm was detected in the second phase of this project: students were less anxious during input and most anxious during output. The paired samples T-test showed that there were significant differences between the samples of input and output, but not between processing in phase one and two. One could argue that the moderate levels of anxiety experienced in the beginning of the semester constitute facilitative anxiety. This type of anxiety may motivate learners to persist and redirect their attention, but it is still not enough to rescue students from a cycle of doubt that can affect output. Table 1 displays these results: If we only consider the results obtained through the FLCAS, the answer to the second research question (“Do levels of language anxiety decrease over time?”) is positive. However, as indicated in Table 1, anxiety levels decreased significantly during input and increased significantly during output, which contradicts the results obtained through the FLCAS. As found in MacIntyre and Gardner’s investigation (1994), in the first phase of this study, anxiety at each stage of acquisition was positively correlated to the FLCAS scores, signifying that when the anxiety during input, processing, and output increased, the FLCAS also increased. However, in the second stage of this study, findings pointed to a different scenario. The levels of anxiety obtained through the FLCAS were negatively correlated to processing, signifying that although the results of the FLCAS decreases, apprehension during processing and output increases. Additionally, the mean FLCAS score was positively correlated to the input only, indicating that when the levels of anxiety (FLCAS) increases, anxiety in input also increases. These findings suggested that if behavior is only examined during the output stage (when the FLCAS is the only instrument used), there is the risk of neglecting the influence of anxiety at earlier stages of acquisition and, consequently, ignoring the link between stages. By assessing anxiety during the three phases of acquisition, the researcher can capture both pervasive and subtle effects of anxiety. The third research question posed sought to determine whether novice students were more anxious than advanced learners. The data analysis exposed a tendency toward language-anxiety oscillation in the three levels of instruction (beginning, intermediate and advanced). Data analysis showed that anxiety levels reduced in the second phase of the research among all students. Anxiety mean scores among students in elementary courses went from 89.1 (SD= 24.8) to 88.6 (SD=24.9); in intermediate courses, they decreased from 93.9 (SD=27.5) to 90.4 (SD=26.8); and from 93.6 (SD=18.2) to 88.2 (SD=19.2) among advanced learners. These numbers show that the levels of anxiety were higher among learners in elementary classes than in intermediate- and advanced-level learners. These findings are consistent with results of several studies (Gardner, Smythe, & Brunet, 1977; Sparks & Ganschow, 2007; Sparks, et al., 1997). Gardner et al., (1977) maintained that when experience and proficiency increased, anxiety decreased. It is noteworthy that these advanced level learners also obtained lower final grades than their counterparts enrolled in intermediate level classes, suggesting a correlation between high anxiety and low achievement. Discussion and Concluding Remarks
The findings suggest that students’ level of instruction and experience play an important role in how anxious learners are when learning and, in particular, speaking a second language. In broader terms, the study’s results emphasized the need to observe learners’ behaviors and attitudes in foreign language classrooms, and to invite teachers to look beyond learning outcomes or language production. I am convinced that by identifying the tasks, beliefs, attitudes, and teaching methods triggering anxiety, teachers can help students reduce their levels of anxiety during all stages of acquisition. In turn, students will avoid engaging in a cycle in which anxiety increases at output, making learners more reluctant to speak and, as a result, progress more slowly in their learning, retaining the high levels of anxiety. This domino effect can inhibit enjoyment associated with learning, make learners underestimate their abilities to cope with language anxiety, and dissuade learners from confronting their fear of communicating in the target language.

Although this study has attempted to capture the nuances of language anxiety during input, processing, and output, there is still a need to establish correlations between anxiety in each stage and performance in a set of isolated tasks that represent each phase of acquisition (MacIntyre & Gardner, 1994). On a more positive note, by not solely examining behavior at the output stage, this study presented a discussion on the influences of anxiety at earlier stages and took into account the links among stages. By exploring the subtle effects of anxiety during each stage of acquisition, the study captured and analyzed snapshots of the dynamics of anxiety among learners of Portuguese. We must keep in mind that the simple evaluation of anxiety during output can be insufficient in clarifying a multifaceted construct such as second-language anxiety.

Viviane Gontijo teaches and coordinates the Portuguese language courses at Harvard University. Her areas of interest include motivation, attitude, language anxiety, the teaching and learning of closely related languages, and heritage language.