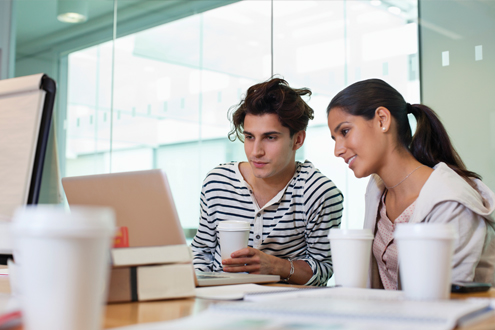 There is no question that one’s success in any task is closely related to motivation. Learning a language is no exception. But what is motivation?

According to behaviorist theory, motivation is quite simply the anticipation of reward driven by previous experiences of reward for behavior. In this view, our acts are likely to be at the mercy of external forces.

In cognitive terms, motivation draws much more heavily from the individual’s “decisions, the choices people make as to what experiences or goals they will approach or avoid, and the degree of effort they will exert in that respect’’ (Maslow, 1970). Some cognitive psychologists see underlying needs or drives as the compelling force behind our decisions.

According to constructivists, each person is motivated differently based on his unique environment. However, these unique acts are always carried out within a cultural and social milieu and cannot be completely separated from the context. Abraham Maslow (1970) viewed motivation as a construct in which the ultimate attainment of goals was possible only by passing through a hierarchy of needs, which were solidly grounded in community, belonging, and social desires. In his view, motivation was dependent on the satisfaction of fundamental physical necessities and then of community security, identity, and self-esteem, which finally lead to self-actualization.

There are different reasons for studying a foreign language: some study a language for practical reasons, while others are interested in a particular language, its speakers, and its culture. For some, language learning is only an abstract undertaking required for an academic degree. Gardner and Lambert (1972) define integrative and instrumental motivation. Falk (1978) believed that the successful students in the learning of a target language are those who have a desire to become familiar with or even integrate within the society in which the target language is used; this kind of motivation is known as integrative motivation.

Gardner’s hypothesis (1982) was that integrative-oriented learners were more persistently and intensely motivated than other learners. In his view, an integrative-oriented learner would have a stronger desire to learn the language and would have more positive attitudes towards the learning situation, and thus be more likely to expend more effort in learning the language.

Gardner believes that the interactively motivated students are more active in language classes and more successful at learning a second language. These students are more eager to participate in community activities when given the opportunity, and to interact with members of that community, so they are less likely to drop out of language study in subsequent years.

It is worth mentioning that an instrumental motivation is tied to a specific goal, so its influence tends to continue only until that goal is achieved. If the goal is ongoing, it is possible that the instrumental motivation would also continue to be active. To a considerable extent, this is the point made by Spolsky (1989) in his analysis of the role that economic factors can play in promoting second-language acquisition in some contexts.

Deci and Ryan (1985) proposed the intrinsic/extrinsic motivation theory. According to Rotter (1966), intrinsic/extrinsic motivation is related to the term locus of control. Considering Rotter (1966), if people place responsibility for their lives within themselves, they have internal locus of control and a self-motivated character. In order to achieve internal locus and self-motivation, you need to give up the security of making excuses and to take responsibility for all decisions and actions.
Intrinsic motivation is motivation which is within students. Intrinsically motivated students study because they want to. The material is interesting and challenging, and the student receives some kind of satisfaction from learning. In intrinsic motivation, there is no reward except the activity itself.

Extrinsic motivation refers to motivation that comes from outside of an individual. The motivating factors are external or outside rewards, such as money or grades. These rewards provide satisfaction and pleasure that the task itself may not provide.

A person who is motivated extrinsically will work on a task even when he has little interest in it because of the anticipated satisfaction from some reward. The reward can be something as minor as a smiley face or something major like fame or fortune. Extrinsic motivation does not mean, however, that a person will not get any pleasure from working on or completing a task. It just means that the pleasure anticipated from some external reward will continue to be a motivator even when the task to be done holds little or no interest. For example, an extrinsically motivated student may dislike an assignment, may find it boring, or may have no interest in the subject, but the possibility of a good grade will be enough to keep him motivated to put in the effort to do well.

Maslow (1970) claimed that intrinsic motivation is clearly superior to extrinsic, because learners are motivated to achieve “self-actualization.” Once basic physical, safety, and community needs are met, regardless of the presence or absence of extrinsic reward, we will strive for self-esteem and fulfillment. One of the most effective ways to help students is to free them from the control of rewards (Bruner, 1966).

In some cases, intrinsic and extrinsic motivation may overlap to some degree, because one may be motivated from both an inside and outside source at the same time. Obviously, both kinds of motivation play important roles in learning a foreign language.

What Influences Motivation?
According to Gardner, many factors influence motivation and acquisition of a second language. These factors include personality variables, attitudes towards the social and cultural milieu, and linguistic and non-linguistic outcomes of the learning experience.

Giles and Coupland (1991) believe that individual differences such as intelligence, language aptitude, motivation, and situational anxiety can influence the acquisition of a second language. These variables depend on the setting or context in which learning takes place. For example, in a formal setting, intelligence and aptitude play a dominant role in learning, while in an informal setting, they exert a weaker influence.

Another factor which influences motivation is the attitude of learners. Most people seem to agree that attitude and motivation are closely related to success in language learning. When the only reason for learning a second language is external pressure, internal motivation may be minimal and positive attitudes toward learning are likely to be negated. On the other hand, if students have favorable attitudes towards the new language and its speakers, towards the teacher and the program, they might put more effort into assessments and look for situations wherein they can obtain further practice in the foreign language.

Different beliefs about cultures and languages have different impacts on second-language acquisition. Gardner suggests that expectations regarding bilingualism, combined with attitudes toward the target language and its culture, form the basis of an individual’s attitude towards language learning (1979, cited in Skehan, 1993).

Language teachers and researchers are well aware that students have preferred modalities of learning. Consequently, when learners are given some freedom to choose the style of learning, they usually do better than those who have a learning style imposed on them. So, styles of learning also affect motivation.

1. Deal with material geared to their level.
2. See purpose in their activities and study.
3. See their studies as important.
4. Are given demanding work.
5. Live in a secure environment.
6. Feel the learning is for them and not for the teacher.
7. Work with interesting material.
8. Experience more success than failure.
9. Have the opportunity to express their psychological needs for success, recognition, and approval.
10. Conceive of themselves as capable individuals.
11. Have some opportunity to make decisions, enter into the planning, and feel responsibility for participating.

Fishman (1984) maintains that an important factor in motivation to learn a second language is its “socio-functional” validity. From the student’s perspective, learning a second language may or may not be worthwhile, depending upon its social reality for the learner. Language learning has an important social function when the learner has a reason for using the acquired knowledge and skills to communicate with other people of importance to him. In other words, when no external validity exists, language learning loses its functional relevancy, and lack of motivation becomes a problem.
To improve motivation, teachers need to consider cognitive, affective, social, and perhaps even psychomotor variables. Here are some recommendations for improving students’ achievement motivation.

1. Cognitive
a. Give students feedback as to their progress (Klausmeier and Ripple, 1971).
b. Use resumes and review sessions to help students organize the material in their minds (Oliva, 1972).
c. Use classwork that requires the use of previously learned material (Gage and Berliner, 1975).

2. Affective
a. Develop a system of rewards for good work or good conduct (Klausmeier and Ripple, 1977).
b. Give assignments that appeal to students, that they can accomplish, and that will improve their class performance the following day (Olive, 1972).
c. Use simulations and learning games in appropriate situations to enhance learning and heighten motivation (Gage and Berliner, 1975).

3. Social
a. Discuss desired “prosocial” behavior with the class (Klausmeier and Ripple, 1971).
b. The teacher should comprehend the power relationships operating in the classroom. The teacher has inherent powers to motivate: reward, coercive, and expert power. Although these powers give the teacher some advantage, students also have a degree of social power that can be employed individually and collectively to influence teacher behavior (Gage and Berliner, 1975).

In language learning, motivation is a key factor. Students should be motivated in different ways, because different students with different characteristics need different types of motivation.