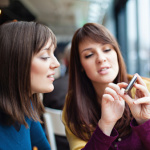 Google Translate, an app that is estimated to perform about one billion translations a day, has officially added two new translation technologies. The Word Lens software, which Google acquired from Quest Visual in May of 2014 has been integrated with Google Translate to perform instantaneous visual translations, and the previously existing real-time conversation mode has been updated to provide faster and more fluid interlingual interactions, all without being connected to an Internet or data source. The Word Lens feature is currently available from English to and from Spanish, Portuguese, Italian, French, German, and Russian, with additional languages to be added on a rolling basis.

Google has dubbed this translation advancement, “one step closer to turning your phone into a universal translator and to a world where language is no longer a barrier to discovering information or connecting with each other.” The technology works similar to Google’s search engine, searching the web for translated documents and running a statistical analysis of likely translations. Google Translate “learns” words by identifying their many correct translations in other documents.

Computer “deep learning” such as this, and the technological replication of a human neural network are hot topics in the software development sphere. Ray Kurzweil, director of engineering at Google since 2012 and developer of speech recognition technology, has held firm his predictions that computers will be able to read at human levels and develop human characteristics by 2029 through deep learning and artificial intelligence (AI) technology. However, Kurzweil urges the world to put aside fears of AI, saying, “We have the opportunity in the decades ahead to make major strides in addressing the grand challenges of humanity. AI will be the pivotal technology in achieving this process.”