How is Cosmo Acquiring English? 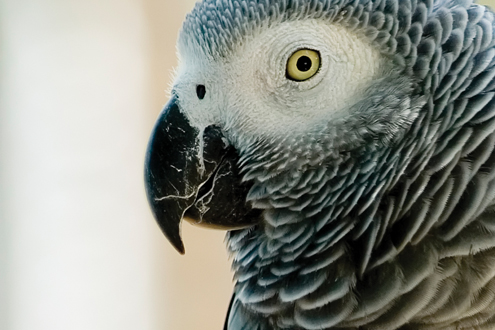 Cosmo is an African Grey parrot who has lived with Betty Jean Craige for ten years (since May, 2002). Cosmo was six months old when she moved in with Prof. Craige.

There is no question that Cosmo has acquired an amazing amount of English. By the time she was six years old, she had a vocabulary of about 100 words and 200 phrases (Craige, 2010, p. 17), and it is clear she uses her knowledge of English appropriately.

Here are just two examples of how well Cosmo understands and speaks English, beginning with my favorite (from Prof, Craige’s remarkable book, Conversations with Cosmo, and her posts on onlineAthens):

Poop
“When she awakens in the morning, Cosmo calls me to her cage: ‘I’m here! Cosmo wanna poop!’ I lift her to the perch on top on her cage, where she poops. Cosmo then declares proudly, ‘Cosmo poop on paper! Cosmo is a good bird!’
Cosmo is not such a good bird when she walks around the house. Fortunately, I have hardwood floors. If she poops near me, she immediately confesses, ‘Cosmo poop on floor.’ If she poops out of my sight, she mutters to herself, ‘Cosmo poop.’ I hear her, and I hurry to the site with a paper towel and a vinegar-based multi-surface cleanser. As I spray the spot, Cosmo mimics the sound, ‘Whiss,’ and adds, ‘That’s for Cosmo poop!” (Craige, 2012a).

Colbert-White, Covington and Fragaszy (2011) confirmed that Cosmo uses language that is appropriate to the situation. They reported, for example, that Cosmo made more attempts to start conversations when Prof. Craige was clearly able to communicate with Cosmo then when Cosmo was alone or it was clear that she was being ignored. They also found that Cosmo was more likely to talk about her own location (“I’m here”) and Prof. Craige’s location (“Where are you?”) when she and Prof. Craige were in separate rooms but within hearing range, and Cosmo also talked louder in this situation.

The Comprehenshion Hypothesis
The Comprehension Hypothesis states that we acquire language and develop literacy when we understand messages, that is, when we understand what we hear and what we read, when we receive “comprehensible input” (Krashen, 1981, 2003). Language acquisition is a subconscious process; while it is happening we are not aware that it is happening, and the competence developed this way is stored in the brain subconsciously.

The evidence for the Comprehension Hypothesis comes from studies of parents’ speech to children, literacy development, second language acquisition, and bilingual education, and is reviewed in Krashen (1981, 1982, 1999, 2003).

Amount of Input
There is no question that Cosmo got lots of input from Betty Jean Craige. Craige and Cosmo have been talking with each other nearly every day for ten years. Craige tell us that “When I am home Cosmo and I talk constantly” (Craige, 2010, p. 40). The fact that Cosmo and Prof. Craige “talk constantly” means that Prof. Craige can make adjustments in her language and do other things to make input comprehensible to Cosmo.

Modified Input
Consistent with the Comprehension Hypothesis is the finding that less advanced language acquirers typically receive modified input. Parents and other caretakers, for example, use “caretaker speech” when they speak to young children. Caretaker speech is known to be composed of shorter sentences, has less complex grammar, and a restricted vocabulary (Krashen, 1981).

Craige clearly uses caretaker speech with Cosmo, simplified in order to help comprehension: “… like foreign language teachers I used a simplified vocabulary with Cosmo. I look at her when I speak, and I consistently use the same words and phrases. For example, I always say, ‘Cosmo wanna go in a car?’ and never vary the question with synonyms. I don’t say ‘Cosmo wanna ride?’ or ‘Would you like to go for a drive in the automobile?’ I say ‘peanut’ for all kinds of nuts: peanuts, walnuts, pecans… cashews…’” (Craige, 2010, p. 41).

Context and Relevance
All discussion with Cosmo relates directly to Cosmo’s needs, interests and desires, assuring that the input will be highly interesting and relevant to Cosmo. In addition, as is the case with caretaker speech, the talk is about the here (Cosmo’s immediate environment) and now (or immediate past and future), which provides context for helping Cosmo understand.

Like human children acquiring first language, and like many second language acquirers (Krashen, 1982), Cosmo had apparently been listening and acquiring during her silent period: Most likely, when she started to produce English words, it was not the beginning of her acquisition of English.

Cosmo’s Monologues:
The Din Externalized
It has been suggested that an indication that acquisition has taken place is the “din the head,” spontaneous mental rehearsal of words, phrases and sentences we have heard in a second language, often in the voices of people we have been interacting with (Krashen, 1983). The “din” appears after we have had a good dose of comprehensible input and can make us less hesitant to use the language (Bedford, 1985; de Guerrero, 1987).

The “Din Hypothesis” explains the “language in the crib,” phenomenon (Krashen, 1983). Ruth Weir (1962) tape-recorded her 28-month-old son’s evening monologues, speech he produced alone while falling asleep. This “crib talk” might be the Din externalized, a result of language acquisition and not a form of “practice.”

Like Pepperberg’s parrot Alex, (Pepperberg, 1999), Cosmo has also talked to herself when alone (but in the morning), using language she had acquired, as well as producing other kinds of output, a combination of “words, whistles, squeaks, environmental noises, and silences that went something like this:

Cosmo’s monologues took place “in the months when she was first learning to talk” (Craige, 2010, p. 37), consistent with the idea that this was an “externalized din” and a result of language acquisition.

Alternative Hypotheses
This description fits the picture of language acquisition through comprehensible input, but it does not eliminate alternative explanations.

Direct Instruction
Cosmo received at least some direct instruction: Prof. Craige labelled objects for Cosmo and also “…(corrected) Cosmo’s misuse and mispronunciation of words” (Colbert-White, Covington, and Fragaszy, 2011, p. 1). But Prof. Craige did not give Cosmo “language lessons,” activities deliberately designed to increase her vocabulary. Cosmo herself, however, has asked for the names of things. Craige reports that Cosmo likes to play the game, “What’s that?,” which apparently helped her learn the names for “clothes,” “television,” “bark” and other words (Craige, 2010, p. 42,47).
The game has produced some remarkable exchanges, including this one in which Cosmo began by imitating a dog barking:
COSMO: “Woo, woo, woo. What’s that?”
BJC: “That’s doggy!”
COSMO: “That’s doggy bark!”
(Craige, 2010, p. 47).

A Case of Direct Instruction Not Working:
“I tried to teach Cosmo to distinguish between red feathers and gray feathers. Cosmo had already learned the word ‘feather’… But she could, or would not, say ‘red feather’ or ‘gray feather.’ She would simply grab the feather with her beak and fling it away…” (Craige, 2010, p. 51).

A case of direct instruction not working, but incidental exposure succeeding:
“Lately, Cosmo has been trying to say the word desk… I hadn’t tried to teach her the word. Actually I tried to teacher her ‘Betty Jean’s study,’ which she never learned to say. I must have said ‘desk’ once or twice before she tried to say the word to refer to the table where my computer rests…” (Craige, 2010, p. 46).

Comprehensible Output?
The comprehensible output hypothesis claims that we acquire language when we produce it and have communicative success. When we fail to communicate, we change our hypothesis about how the language works and try again (Swain, 1985; for counterarguments, Krashen, 2003).

Craige certainly makes sure that Cosmo had plenty of communicative success:

“As much as I can — and within reason — I comply with (Cosmo’s) spoken wishes, because I want her to know that language works. I want her to know that use of language enables her to manipulate the environment: to obtain peanuts, go to the kitchen, make people laugh, get a misting [spray with water], get a kiss on her feathers, and get my rapt attention. When she speaks she has power, for she can tell me what to do, even though she’s little and I’m big” (Craige, 2010, p. 80).
The existence of incidental acquisition shows that “comprehensible output” was not necessary for Cosmo to acquire English. The possibility remains that it could have been helpful.

The Most Significant Factor?
The Affective Filter
Several affective variables, low anxiety, self-esteem and “integrative motivation,” a desire to belong to a certain group, are related to long term success in language acquisition. In Smith’s terms (Smith, 1988), the acquirer must consider himself or herself to be a potential “member of the club” of those who speak the language.
To relate affective variables to the Comprehension Hypothesis, it has been hypothesized that for input to enter the “language acquisition device” the acquirer must be “open” to the input: The “affective filter” must be low, or down (Krashen, 1982, 2003).

Perhaps the most significant factor in Cosmo’s case is the fact that she has had a warm and loving interaction with a single person over a long period of time, and they have talked about topics that are of great personal interest to Cosmo.
Unconditional love is clearly the best way to insure low anxiety, self-confidence, and motivation to join the group, in other words, a zero affective filter: “…Cosmo knows that I love her, that I will always give her attention, that I will always feed her, and that I will never strike her, even when she bites” (Craige, 2012b).

Post-script
Craige (2012c) notes that “By the age of 3 (Cosmo) had acquired the vocabulary and grammatical tools she would use in her speech from then on.” According to Prof. Craige (personal communication), since she was five or six, Cosmo has not acquired many new words: “Occasionally, very occasionally, she’ll pick up a new word, but not often.”
Several possible explanations come to mind: (1) A neurologically-based critical period for language acquisition exists in parrots that holds for their acquisition of human language. (2) By age three, Cosmo had acquired all or nearly all the language she needed and resisted acquiring vocabulary that she considered irrelevant. (3) Betty Jean Craige either consciously or subconsciously changed her style of interaction with Cosmo when Cosmo was three years old.
But Cosmo is still learning new things: “… she does pick up new tunes to whistle. This past year she learned ‘Yankee Doodle,’ after I had whistled it only a few times. To learn it she’d whistle a line, wait for me to do the tune, and then try it herself, stopping whenever she forgot the next line and waiting for me to help her out. She also learned ‘Wooden Heart’ a year or so ago” (Betty Jean Craige, personal communication, May 5, 2012).

*My thanks to Prof. Betty Jean Craige for her comments, help and inspiring book, Conversations with Cosmo.

Stephen Krashen is professor emeritus in the Rossier School of Education at the University of Southern California. He has not only published hundreds of papers and books, and introduced several influential concepts to the fields of second language acquisition, bilingual education, and reading but is also a vigorous advocate for research-based educational flexibility. He is a co-author of Language Magazine’s first ebook, SSR in Asia: Empirical studies of sustained silent reading in English as a foreign language, available at https://languagemagazine.com/?page_id=4273.