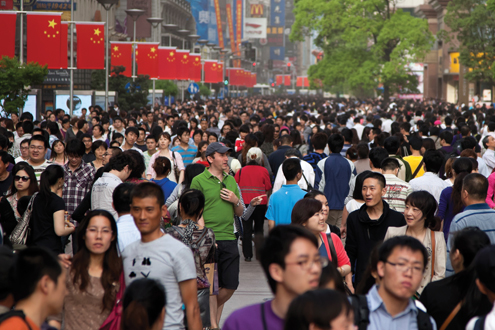 With 2012 being the year of the dragon, there could be some magic for Chinese language learners coming up. The Obama administration is encouraging students to study abroad in China. The 100,000 Strong Initiative is promoting cultural exchange with a country that already sends students to the U.S. in six figures. The official number of Chinese students who came to the U.S. during the 2010-2011 academic year was 157,588 (see “Overseas Students Increase at U.S. Institutions” in last month’s Language Magazine). The President is advocating that U.S. students reciprocate, and launched the initiative to send 100,000 students to China over the next four years. A key aspect of the plan is to create access to study abroad programs in China for underrepresented groups in international education, such as high school and community college students. The initiative promotes both public and private scholarships and programs to study in China.
Many key figures in entertainment, education, and politics have come together to support 100,000 Strong. Last December, music artists Will.I.Am, John Legend, and Coco Lee put on a concert in Beijing to get the word out. Proceeds from the concert will fund scholarships that will send underserved students to China for summer programs.

“We are actively, as a government, trying to train more Mandarin speakers,” Carola McGiffert, director of the 100,000 Strong Initiative, told the China Post. “We need more Mandarin speakers at all levels and all professions, whether they are with the government or not.”
Another program under the NSEP is the Language Flagship Program, a national effort to build language programs that can assist graduate students in achieving fluency in a language critical to U.S. national security. Flagship students are enrolled in language programs at U.S. universities and spend a year abroad.

“Flagship students spend a capstone year abroad directly enrolled in overseas institutions and engaged in meaningful internships. One of the largest Language Flagship programs is in Chinese, with programs at 11 U.S. higher education institutions and the overseas capstone program at Nanjing University in China,” explains Dr. Samuel Eisen, director of programs of NSEP.

Students are encouraged to seek private scholarships as well. One of the organizations assisting in the private-public partnership is Americans Promoting Study Abroad (APSA), a program started by American business leaders who had past leadership experiences in China. The scholarship program aims to bring high school students to China for an all-inclusive six-week program that includes language classes, excursions, a speaker series, and meetings with members of the business community in China. The admissions committee places an emphasis on those who have little or no experience abroad.

“To me, the one thing that I always look for in the interview process is a true desire and interest in China, desire in exploring the world,” reveals Paula Koda, a member of the APSA Board of Directors. “If a student has that spark in addition to all the prerequisites, that’s the person we’re going to be most interested in.”

To enhance the learning process, APSA has teamed up with Cinequest, a Silicon Valley-based global organization that focuses on empowering youth to tell stories through film, and is bringing those messages to global leaders through a major world premiere event. The APSA and Cinequest film project will focus on collaborations between Chinese students, American students, and professional mentors. Together, they will use the films to tell inspirational stories about people who transform difficult situations around the globe. Students from China and the U.S. will then be able work together in virtual and live settings.

“It’s very exciting to bring America and China together; each has strengths and can learn from one another. We’ll be empowering the next generation of leaders with cooperative rather than competitive leadership, which is critical for our country’s future,” says Halfdan Hussey, co-founder and executive director of Cinequest. “There are big things in store for the collaborations that will have far reaching impact on more than just the specific items that we’re creating.”

Other programs focus on students who have already completed high school or the equivalent. One program, China Study Abroad (CSA), provides students with language classes and internship experience. David Goodman-Smith, a managing partner of CSA, believes that, when considering studying abroad in China, it’s important for students to consider goals for going abroad and length of time when choosing a program.

“We think it’s important to start learning Chinese and learn about China more. We want to encourage people who never thought about it before, not to be afraid of coming out here, being excited about what they can learn,” says Goodman-Smith. “In the future, China’s going to play a bigger role and coming out to China and getting a learning advantage will better your future. In the past, it’s always been South America and Europe where people have been going but now it’s just as easy and perhaps more beneficial to head out to China.”

Preparation
Students who want to prepare for their abroad experiences with some language training can benefit from resources at home. Elementary Mandarin learners can study with children’s books developed by Hong Kong-based Professional Publishing People (PPP). The readers were written to appeal to language learners in a fun and engaging way. Illustrations aim to help students situate the use of Mandarin in their daily lives. The books are available in different reading levels.

“Using story-based resources to directly apply what you’ve learned in daily situations and connecting on a virtual learning environment on a daily basis is key to practice reading, writing, and speaking without actually noticing you are learning. When it’s fun, it’s easier,” explains Audrey Reisdorffer from PPP.

For those who are self-studying, there are a number of digital and interactive educational resources. For example, Better Chinese developed an iPad application last summer in association with the National Security Association’s Startalk programs to train the next generation of students. The app is structured to have more self-learning capabilities. It even features audio playback, so students can listen for pronunciation, and autocorrecting mechanisms that allow students to learn at their own pace.

“With the Discovering Chinese iPad application over the summer, students were able to utilize what they had learned at a Chinese restaurant and the Asian Art Museum in the San Francisco Bay Area by merging the cultural points that were highlighted in the iPad and integrating with the outside world,” remarks Esther Luh from Better Chinese.

Music is another popular way to practice Chinese. The Little Dragon Tales, published by Boston-based publishing house Cheng & Tsui, consists of 12 classic children’s songs sung by a Chinese children’s choir based in Toronto. Emmy Award-winning music producer Dave Liang pitched the idea when he saw that many of his friends wanted their children exposed to Chinese. The CD comes with lyrics in both Chinese characters and Pinyin Romanization form so that students can learn by sight and sound.

“We, as editors, looked at it before we published it and we were taken by the attractive rhythms that the music producer put into classic Chinese songs,” says Jill Cheng, president and CEO of Cheng & Tsui. “Music has always been seen as an effective, attractive, fun way to get people involved in learning a language or culture.”

With the 100,000 Strong Initiative under way, it’s clear that organizations, teachers, and companies alike are pushing to reach the goal. Now it’s on the students to take advantage of the countless resources available to study in China.

Connie K. Ho is project editor for studyshare.org, a website for volunteer-based organizations. She writes about service-learning and global volunteerism. Feel free to email her at [email protected] with story ideas, tips, and photos submissions.