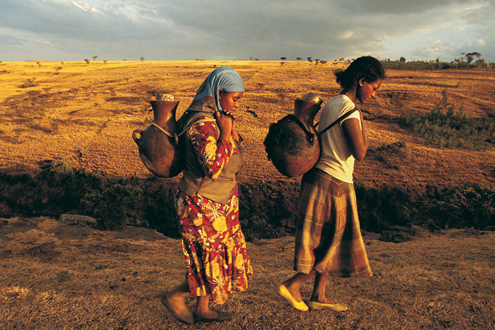 As interest in study abroad to non-traditional destinations continues to rise, so does the number of students interested in African languages and cultures. Despite the fact that there are somewhere between 1,000 and 2,500 languages spoken on the African continent (UNESCO, 2010), there are relatively limited options for students to focus on language study in Africa. New initiatives and programs designed to attract U.S. students to study in Sub-Saharan African countries focus students’ attention on a small subset of the most widely spoken African languages. Accordingly, promising trends in the number of students taking part in study abroad to Sub-Saharan African countries and studying African languages and cultures has been documented over the last decade.

Domestic Language Enrollments
Student enrollment in African languages has remained at relatively low levels until recently. As language enrollments in higher education increased overall in the last decade, many African language educators noticed a significant increase in student interest (Mbeje, 2012; Moshi, 2011). Though numbers are still low in comparison to more commonly taught languages, a survey of 2,514 higher education institutions in the U.S. revealed that enrollments in languages such as Swahili, Wolof, Yoruba, and Zulu have more than doubled in the last ten years (Table 1). 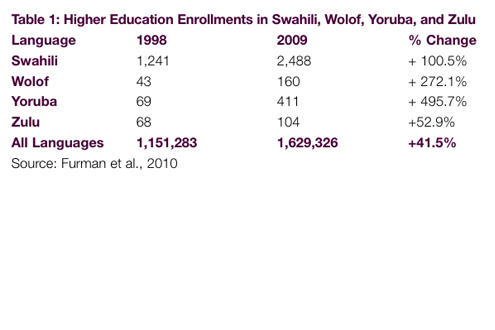 Study in Africa
There has been a considerable increase in the number of students going to Africa. The Institute of International Education (IIE) 2012 Open Doors Report reported a steady increase in the overall number of U.S. students studying abroad for academic credit in Africa from 2000-2009. Though no Sub-Saharan African country has made it into the top ten destinations for U.S. students, the countries where Swahili, Wolof, Yoruba, and Zulu are spoken likewise showed double, triple, and even quadruple increases.

This growth has occurred despite the challenges facing students when planning their study abroad experience in Africa. Several countries are troubled with security issues, and travel warnings often result n institutions declining students the opportunity to study in Africa, which limits the number of countries where U.S. students can safely study. While students planning to study more commonly taught languages overseas have a wide variety of countries and programs to choose from, only a handful of options are available in Africa. 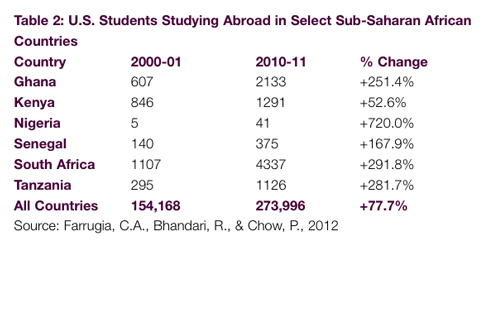 The Fulbright U.S. Student Program, sponsored by the U.S. Department of State and administered by IIE, which provides grants for individually designed study/research projects or English Teaching Assistantships, saw application numbers for awards to Sub-Saharan Africa increase by over 50% over the past decade. Politically stable countries are perennially the most popular among applicants, with over half of the Sub-Saharan Africa 2013-2014 academic year pool applying to Ghana, Kenya, and South Africa alone.

The Gilman Scholarship, also sponsored by the U.S. Department of State and administered by IIE, which seeks to diversify the students who study abroad and the places they go, offers awards for undergraduate students who are receiving Federal Pell Grant funding to participate in study abroad programs. Similar to Fulbright, Gilman’s applicants are drawn in large numbers to Ghana and South Africa, though the Sub-Saharan African countries with the most significant application increases in 2011-2012 were Botswana, Cameroon, and Ethiopia.

Initiatives for Global Professionals
Recent initiatives, sponsored by the National Security Education Program (NSEP) and administered by the IIE, have increased the opportunities available to U.S. students to study African languages both domestically and abroad. The NSEP David L. Boren Scholarships and Fellowships provide funding for U.S. students studying critical languages in non-traditional study abroad destinations. A new African Languages Initiative (AFLI) for Boren applicants was established by Congress to further opportunities for study of the highest-priority African languages in recognition of the strategic and geopolitical importance of the countries where these languages are spoken. The AFLI Boren Awards offer students from all U.S. institutions the opportunity to develop their knowledge of, and proficiency in, Akan/Twi, Hausa, Portuguese, Swahili, Wolof, Yoruba, and Zulu. Since announcing the AFLI, the Boren Awards logged a substantial increase in the number of applicants interested in learning African languages and studying in Sub-Saharan Africa. In fact, Swahili rose to become one of the top languages among applicants and recipients in 2012, with double the number of applications compared to ten years earlier.

The AFLI is unique in its approach of combining long-term study abroad and development of advanced language proficiency tied to career goals. Students who receive AFLI Boren Awards participate in intensive language study at the University of Florida, Gainesville during the summer before heading overseas for a semester or year program of language study in Africa. The American Councils for International Education administers an official overseas program for AFLI recipients going to Tanzania, Nigeria, South Africa, and Mozambique. The most recently recorded oral proficiency interview results from AFLI Boren Award recipients demonstrate the success of the initiative — 15 out of 16 Swahili students, whose initial proficiencies were almost all at the Novice level, achieved the Advanced level. Students with an eye to federal careers such as health, development, public diplomacy, and national security are attracted to the AFLI Boren Award. Just like other Boren Awards recipients, AFLI participants commit to working in the federal government for at least one year after graduation. This funding has been a key resource for the growing U.S. interest in Africa.

Another NSEP initiative, The Language Flagship, established a Swahili flagship program for undergraduate students at Indiana University in 2010 with an even higher language goal than the AFLI Boren Awards. Students in the program aim to reach a Superior level of proficiency in Swahili during their undergraduate studies while majoring in another subject area. In order to achieve this goal, students spend a capstone year abroad in Tanzania immersed in Swahili studies and engaged in an internship.

While there are other programs and initiatives available, the investment in African language studies by the NSEP is generating a new set of opportunities for students attracted to African studies. The initiatives support students’ academic and career goals by providing them with the funding necessary to study an African language overseas to a level of proficiency valued in the workforce. Furthermore, students who participate under these initiatives represent a unique group of students whose academic and career goals include cultivating linguistic and cultural skills related to Sub-Saharan Africa. Data from the Boren Awards serve as an example of students’ evolving interests over time — the languages students are studying and their countries of choice for study abroad.

Student Interest in Africa
AFLI Boren Award recipients’ application statements and progress reports offer insight into why students today are interested in learning African languages. In order to receive an award, students must express a clear statement of how they will apply their linguistic and cultural experience in Africa in future federal service.

Students who are majoring in African studies are often drawn to overseas language study as a means of developing rich experiences that enable them to better understand the people, language, and culture that they have been studying. One student explains this connection:

“My interest in East Africa and Swahili stems from an interest in the history of the Swahili Coast, which was a cosmopolitan society, economically structured on trade and trade relations between nations as far as India and China. The Swahili language is a testament to the fact that the society had been formed by various groups, as it contains Arabic and Persian influence… Learning to speak Swahili and participating in the cultural immersion associated with studying abroad in combination with my knowledge of African history and degree in Africana Studies will make me a uniquely qualified candidate for any position I seek as a foreign affairs officer.” (AFLI Boren Scholar, Tanzania, 2012)
Like other students, this student viewed her experience in Tanzania as one that would fully round out her academic experience in East African studies and better prepare her for the future.

For some students, the AFLI Boren Award is an opportunity to study an African language not available at their home institution. One student describes how this opportunity connects to his professional goals:

“Several modern critical languages are taught at my university, but Swahili is not one of them. To fulfill my second goal, working towards fluency in Swahili, I must have the opportunity to study the language. Swahili is becoming a language crucial to national security. Going to Tanzania will be beneficial because I will learn the language and culture required to be adept as a liaison between American and African institutions at the interpersonal level.” (AFLI Boren Scholar, Tanzania, 2012)

A majority of the students applying for overseas language study in Africa demonstrated recognition of Africa’s presence in the global arena. They furthermore emphasized the value of learning a commonly spoken African language in order to develop better relationships with African countries. One student wrote that:

“Swahili as a language is vitally important diplomatically. Swahili is the lingua franca for most of East Africa, and modern studies suggest that between 80-100 million Africans understand Swahili. …Swahili’s importance as an international language will only increase in scope in the upcoming years, and to deny this trend is to guarantee long-term failure with respect to engagement in Africa.” (AFLI Boren Scholar, Tanzania, 2012)

Similar to other students, this student identified not only the role that Swahili plays in Africa today, but also the future significance of Swahili.

Students also connected this recognition of Africa and African languages with their long-term career goals. Students planning to work in the field of African studies named a wide variety of career possibilities in government and non-governmental organizations ranging from post-conflict stabilization, diplomacy, and humanitarian aid to women’s economic development, education training, and public health. Their experiences overseas helped to expose students further to these career fields and opportunities for their future. Participation in internship experiences provided formative experiences for students such as the one described by an undergraduate student in Tanzania:

“I became involved with a local organization — UHAI — which is involved in the agricultural and livestock industries of Zanzibar. This was a wonderful opportunity not only to meet local Zanzibaris, but to utilize my Swahili, build vocabulary, and learn about industries that are an important contribution to Zanzibar’s economy.” (AFLI Boren Scholar, Tanzania, 2012)

For many students, their goals included working in a Sub-Saharan African country after graduation. One student wrote that:

“Political analysts use political, social, cultural, and historical information to interpret intelligence about foreign political systems. I believe that studying Zulu in South Africa would prepare me for this career because it is such a diverse country.” (AFLI Boren Scholar, South Africa, 2012)
These statements demonstrate students’ personal motivations and perspective on the value of learning an African language for their future professional careers.

Recent events underscore the importance of understanding Africa in the context of global security, developing markets and energy, and health and education issues. African languages have caught the attention of a new generation of students. The stronger interest coupled with new programs and initiatives mean that U.S. students planning to study in Sub-Saharan Africa are arriving better equipped with the linguistic skills to complement their study abroad experience. And for Novice-level students arriving, the structures are in place to offer the high-quality immersive language instruction students need to interact effectively within their host communities. The impact of these opportunities will be felt in the near future as students who have in-depth African language and cultural experiences graduate and begin their professional careers.

Although the number of students choosing to study African languages has grown, in the grand picture of language study, this is still a small number of students and therefore difficult to sustain and grow without adequate support. Continued growth is contingent upon policymakers increasing funding for initiatives focused on African language education. It further demands that parents and students ask higher education institutions to establish consortiums and other collaborative efforts that will give students access to the African language instruction they need to fulfill their academic and career goals.