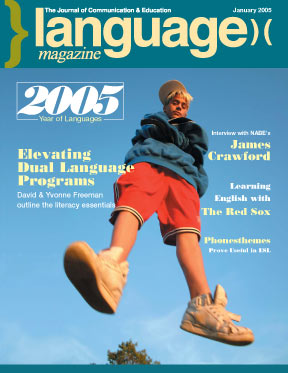 Many observers suggest that the reason behind this failure is the enormous wave of immigration that the state has absorbed over the last twenty years, however the report points out that “the decline of California’s K-12 system has paralleled the shrinking of per pupil financial support for education during the past three decades.”
While California’s annual per student spending was about $400 above the national average in 1969-70, it fell to more than $600 below the national average in 1999-2000. The state ranked 44th in per pupil spending in 2001-2002, according to Education Week‚s recently published survey.

Support for K-12 education as a proportion of the per capita income of Californians has fallen as well. California spent about 4.5 percent of the personal income of state residents on public education in the early and middle 1970s which was about the same as the rest of the country. But from the late 1970s through the middle 1990s, California’s support lagged about 1.2 percentage points behind the national average.

Soon after the release of the report, the state’s superstar governor announced his proposal to cut state spending on K-12 education and community colleges by $2.2 billion, despite his earlier promises to protect school funding. Schwarzenegger had vowed to protect schools from such cuts in return for their acceptance of billions of dollars in reductions last year to help balance the current budget. He also announced his plan to weaken Proposition 98, a constitutional provision to guarantee that education gets a set share of state revenues.

In announcing the proposed cuts, Schwarzenegger chose to rely on the old adage of attack being the best form of defense, roundly criticizing California’s educators for high failure rates despite their budget of $50 billion.
Reaction to the governor’s proposals has been swift. State Supt. of Public Instruction Jack O’Connell called the spending proposals “devastating”, adding “while money is not the only answer to what ails our schools, it is no coincidence that those states which spend the most on their children also consistently show the highest achievement.” Scott Plotkin, executive director of the California School Boards Association, said, “We are left absolutely speechless by his proposal to suspend and amend Prop. 98 and resolve the state’s fiscal troubles at the direct expense of six million public schoolchildren.”

Since his election, Schwarzenegger has already burdened California’s children with the repayment of massive loans. Now, he is trying to steal from their education funds.

Not surprisingly, education groups have begun mobilizing to fight the governor’s proposals. We have a duty to do all we can to protect our educational systems from unwarranted cuts and criticism.

2005: The Year of Languages
Marty Abbott explains how you can get involved

Total Read All
Jen Woodmansee-Barnett in praise of whole language

Speak English… Or Else!
Domenico Maceri on when language becomes law