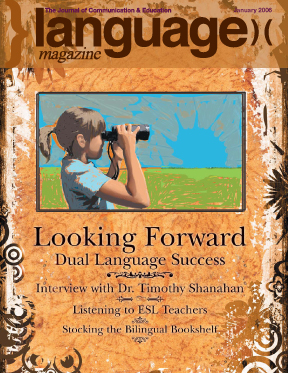 When I came to California, I could not understand how anybody could be against bilingual education. As a child, I had lived in Canada where they experi­mented at my school with total French immersion classes for English-speaking children in an effort to encourage Anglophones to better understand their French-speaking neighbors. I spent my teens in the U.K. during a period of European integration in which one of the recurring national concerns was how the monolingualism of the British would put them at a disadvantage to their European counterparts, so the concept of bilingual education was welcomed by all with open arms. Then I went to school in Spain and France, where most of my peers were bilingual or even trilingual, so it seemed the natural way forward.

Now there is an enormous demand amongst middle-class parents for dual language programs because they recognize the advantage that bilingualism will give their children. According to the Center for Applied Linguistics, there are more than 300 dual language (or two-way immersion) programs around the country, of which over 100 are in California alone. Nearly all programs are English/Spanish, but Japanese, Navajo, Cantonese, Mandarin, French, and Korean are also available.

The differentiating factor between dual language programs and traditional bilingual education programs is that within each dual language program, there has to be a balance of language-minority and language-majority students, with each group making up between one-third and two-thirds of the total student population. That may be possible in certain areas of the country, but many of the areas in California which benefited from bilingual education are predominantly Hispanic, so it would be impossible to balance the numbers of language-minority and language-majority students in these areas.

Obeying the Golden Rule
Listening to Teachers of English Learners
Julie Maxwell-Jolly, Patricia Gándara and Anne Driscoll summarize the findings of their survey of challenges to and professional development needs of California teachers

An Interview with Dr. Timothy Shanahan
David Boulton meets with the chair of the National Literacy Panel and the President-Elect of the International Reading Association