The Language of Choice 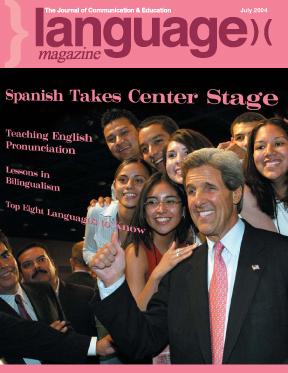 The emergence of the Hispanic community as America’s largest and fastest-growing minority is having a fundamental effect on the nation by bringing Span­ish into the main­stream of Amer­ican culture.

According to estimates from the Census Bureau, 38.8 million Hispan­ics were living in the U.S. in 2002, representing about 13.4 percent of the total population. And the latest population projections indicate that by 2025, Latinos will account for nearly one out of every five people living in the U.S. — over 60 million people.

Hispanics in the U.S. are comprised of subcultures from over 20 countries in Central and South America, the Caribbean and Spain, with the majority (63 percent) of Mexican heritage. The culture, beliefs, and opinions of U.S. Hispanics cannot be distilled into one classification, because there are differences in native countries’ geography, indigenous ancestry and colonial origins.

There is no one monolithic “Hispanic community,” but, if anything unifies Hispanics, it is language. Spanish stands as a symbol for U.S. Latinos; regardless of history. Spanish is the key to individual and collective pasts.
Spanish is likely to remain the language of preference among U.S. Latinos. In fact, Univision is now the No. 5 network in the United States, behind ABC, NBC, CBS and Fox.

Despite this emphasis on Spanish, the vast majority of Hispanics who speak Spanish are also proficient in English. According to the 2000 Census, 89.5 percent of the 28.1 million Spanish speakers above the age of five also spoke English, and over two-thirds (71.8 percent) spoke English “very well” or “well.”

In essence, we are becoming a bilingual country, where consumers choose the language they prefer for each type of communication. It is this ability to choose which is important, but which will only exist if our educational system succeeds in effectively teaching children how to speak English, while allowing them to develop their Spanish language skills.

In this election year, both incumbent Presi­dent Bush and presidential hopeful John Kerry are doing what they can to harness the Latino vote — campaigning in Spanish, attending Latino events and emphasizing their Hispanic links. Whatever their efforts, the winner amongst Latinos will be the candidate with a credible plan to guarantee adequate funding for an inclusive, adaptable and effective school system.

Pronounced Perfect
In the second part of our guide to teaching English pronunciation, Steven Donahue examines the types of accent interference common to speakers of major languages

English-Only Speakers Need Not Apply
Nancy Zarenda reports on the growing demand for languages in the U.S. labor market