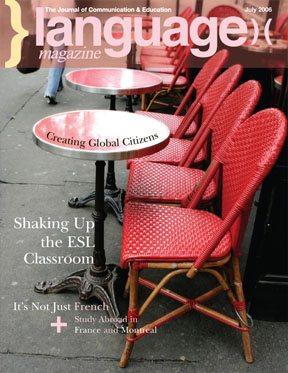 Last month saw the 30th anniversary of the Soweto uprising which eventually led to the dismantling of apartheid in South Africa. The often ignored trigger for the uprising was the Afrikaans Medium Decree which made Afrikaans the compulsory language of instruction in black schools from the last year of elementary school to the last year of high school. Although the uprising occurred in an extremist state and many other factors contributed to the situation, we ignore the importance of linguistic liberty at our own peril.

The mere suggestion that the provisions of the Voting Rights Act need to be reviewed before they are renewed (see News, page 7) is reminiscent of that apartheid era. The Voting Rights Act of 1965 was probably the most important federal civil rights legislation enacted during the 1960s, guaranteeing the basic right to vote to racial minority citizens. And, as the Justice Department’s recent decision to sue Texas’s Brazos County for violating the voting rights of Hispanics demonstrates, the act is vitally important in protecting minority voters in current-day politics.

Section 203 of the Act, which Congress added in 1975, mandates language assistance in certain jurisdictions to promote voting by citizens with limited proficiency in English. There are now 466 such jurisdictions in 31 states. Since 2002, the Justice Department’s Civil Rights Division has filed more minority language cases than in the entire previous history of the Voting Rights Act. The majority of its language cases filed since 2002 have protected the rights of limited English speaking Hispanic citizens, in contrast to most of the cases brought in the first 25 years after the 1975 minority language amendments to the Act. The Division has filed successful minority language lawsuits across the country, with cases in California, Florida, Massachusetts, New York, Pennsylvania, Texas, and Washington.

Opposition to this provision has been linked to recent immigration-reform movements and “Official English” proposals. The argument is that naturalized citizens are required to have a basic knowledge of English, so they should be able to vote in English. However, the provision was created to help Hispanics and Native Americans whose citizenship arises from birth in the U.S.

Congress recognized in 1975 that language assistance was necessary to remedy longstanding discrimination against Hispanics, Asian-Americans, and Native Americans, which resulted in language barriers to enfranchisement. Insisting on English-only ballots has the same effect as literacy tests, banned by the Voting Rights Act.

Maybe opponents of multilingual ballots see an opportunity to reduce voting by language-minority citizens. However, the American people will not tolerate such oppression. The reality is that no government has the right to impose the use of a particular language. People naturally need to communicate and will do so in the most practical way. Government should facilitate that process, not dictate its manner.

It’s Not Just French!
Constance Dziombak argues that the benefits of language learning go way beyond simple acquisition of language