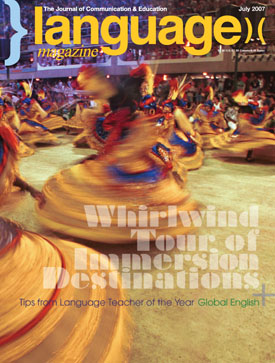 According to California’s Governor Schwarzenegger, immigrants should avoid Spanish-language media if they want to learn English quickly. Now the Governor may not be an expert on language acquisition, but he has managed to acquire a reasonable grasp of English over the last 39 years that he has lived in the U.S. So, we should at least listen to what he has to say:

“When I came to this country, I did not, or very rarely, spoke German to anyone,” the Governor said at the annual convention of the National Association of Hispanic Journalists. “Not that I didn’t like Austria, my heart was always in Austria, but I wanted to as quickly as possible learn the English language. And I felt that through immersion, and just really sitting in front of the television set – and I remember I watched all the comedies and the news programs. I couldn’t understand a word they were saying, but nevertheless I watched it, and eventually I got with it, and I learned. And I remember that the teachers at Santa Monica College also told me the same thing. They said, ‘Read the LA Times, even though you don’t understand it. Look at your dictionary and learn, and look at books that are English, look at comic books that are English, watch television, listen to radio that is English.’ And it really helped me, that within a year and a half or two years, I really got my act together so I could read the paper and I could understand the news and really get with it also in school.”

Even though most modern research suggests that watching TV and reading books or newspapers in Spanish can actually accelerate English language acquisition, Arnold’s advice may have been appropriate 25 years ago when the global economy was more of a concept than a reality for most people, so the value of languages other than English was largely ignored. However, in the 21st century, we need to recognize the importance of all languages and strive to preserve heritage languages while acquiring English.

With our history of immigration, we should be one of the most linguistically diverse nations in the world, but successive generations have lacked the resources and the foresight to retain their mother tongues. Now, we need to evolve into a nation that happily interacts globally at all levels if we are to retain our economic preeminence.
Of course, English is the world’s language of commerce and a great asset that every American should have; but we need other languages as well. The rest of the world is learning English fast while retaining their mother tongues, so why can’t we do the same?

We need to evolve from a monolingual society dominated by European culture to a multilingual, multicultural society in order to succeed in the global economy.

One of the best examples of success through evolution is the English language itself which owes much of its success to its ability to adapt to different cultures, and its swift absorption of phrases and words from other languages. English is now owned by everyone — not just English mother-tongue speakers — thanks to its ability to morph according to demand.

American society has evolved, is evolving, and needs to evolve further if it is continue its success.

Language Teaching 101
Christine Lanphere, Language Teacher of the Year, explains how getting the best from students can be as simple as ABCD

Spain: A Quilt of Many Cultures
Comprised of a patchwork of ancient kingdoms, every region offers its own unique flavor of Spanish culture as Lilah Davies offers a taste of its most exciting destinations

La Belle France
There can be few experiences more appealing than studying French in France, so Hannah Zeiler is hard pressed to choose between its delightful destinations

Global English
Steven Donahue investigates the devolution of English into the simpler, international form of Globish

Reviews
Isabel Schon on stories in Spanish for the very young