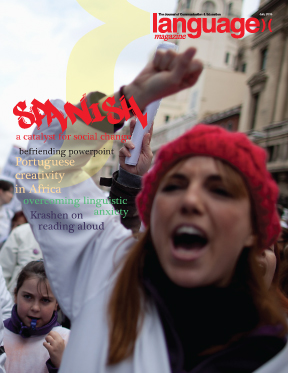 The news that there are more Spanish speakers in the U.S. than in Spain (see page 14) may not surprise many Americans, but when it’s combined with the recent reports showing that there are more young people speaking Spanish (including non-Hispanics), while U.S. Hispanics are speaking more English than ever, the prospect of a bilingual nation seems almost likely, and the even more fascinating possibility of the U.S. developing its own hybrid language, or creole, is not beyond imagination.

By 2050, an estimated 150 million U.S. residents will speak Spanish — a third of the nation’s predicted total population — but past experience indicates that the majority of these Spanish speakers will also speak English, and current youth-culture trends have shown the inclination amongst young bilinguals to develop their own hybrid language, often called Spanglish, although Yanqui (Yankee in Latin America), or just American, might be more appropriate.

Of course, America has thousands of its own indigenous languages and probably just as many immigrant languages, but all of its majority languages are colonial — English, Spanish, Portuguese, and French. Boosted by the explosion of social-media communication and music culture, we can expect language to develop very quickly over the next few decades, incorporating plenty of minority-language terms as it does. The popularity and poetry of rap is already changing the way we speak, so expect the inclusion of African American Vernacular English in the mix. All of a sudden, the possibility of the U.S. overcoming its colonial linguistic hangover starts to look more probable.

As other North and South American economies grow, we can expect the same social-media/youth-culture explosion across the continents, in which the majority of the population speaks Spanish as first and English as a second language. So, most of the continents’ countries could easily adopt this new creole as the language of the Americas. This would serve to unite the continent(s) while boosting communications and therefore trade. If demographic trends continue, potential mother-tongue speakers of American would far outnumber those of Chinese and even Hindi. It may even have the potential to overcome English as the world’s lingua franca and it would soon become a language in its own right. In the same way that English is an amalgamation of Anglo-Saxon, Latin, and Celtic languages, this American language would have enough of its own hallmarks to be classified as a distinct language.

As with all change, there’s bound to be widespread aversion to the adoption of a new language, but the prospect of divesting ourselves of yet another vestige of colonialism should help to pave the way for its acceptance. All Americans, whatever their heritage, would be able to share in the pride of having their own language.

What better way to celebrate the Fourth of July than imagining the prospect of having our own American language?

Portuguese from Cape to Cape
Brazil may be the Portuguese powerhouse, but the language is still alive and well in Africa

Spanish as a Vehicle for Social Change
Kristal Bivona, Sandra Ruiz and Daniel Ward discuss the movements and histories that made Spanish such an important language for activism