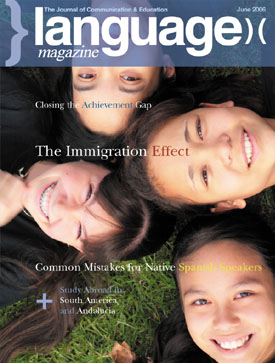 The U.S. Senate has passed its version of the latest immigration bill with Senator Inhofe’s so-called “national” English amendment, which would make English the “official” language of the U.S. in everything but name.

While everybody else is waking up to the benefits of multiculturalism and multilingualism in our increasingly global society, our venerable government finds it pertinent to cater to its most conservative supporters who hold immigrants to blame for all ills thanks to years of propaganda. This sort of politicking is usually reserved for times of recession when scapegoats are required to take the blame, but this time it is the fear of failure in the upcoming mid-term elections that has inspired the Republicans to appeal to their traditional power base. If this sounds cynical, remember that in 2003, Inhofe called global warming the “greatest hoax ever perpetrated on the American people,” after receiving nearly $290,000 from oil and gas companies for his 2002 reelection campaign.

Once again, our elected representatives are wasting their time and our tax dollars by discussing and drafting legislation that has no purpose but to bolster plummeting polling figures. Everybody wants to learn English, so why not fund more ESL programs instead of wasting money stating the obvious that English is the de facto national language of the U.S.

Just last month, as I was boarding a busy flight from Miami to Los Angeles, I heard an elderly Hispanic gentleman become increasingly agitated as a flight attendant insisted on moving his hand luggage to accommodate other passengers. He was explaining in Spanish to her that he was diabetic and that he needed easy access to his medication to avoid his previous experience of being met on the runway by paramedics. Unfortunately, none of the crew at the rear of the aircraft spoke Spanish (even on a flight from Miami to L.A.), so I intervened to explain the situation, which was soon resolved.

In the meantime, it became clear that there were problems with the restrooms which needed to be repaired before we could take off, yet the crew were unable to explain the situation to the Hispanic majority of passengers, who were now filling the aisles. Before I knew it, a handset was thrust in my palm and I was asked to explain the problem in Spanish.

Obviously, this situation would never have arisen if English were already our national language, and I could have enjoyed the flight in peace, comfortable in the knowledge that none of my fellow passengers had a right, entitlement, or claim to services in any language other than English.

Closing The Achievement Gap
Carlos A. Garcia presents a blueprint to make schools good enough for everyone

Last Writes
Richard Lederer on the power of books