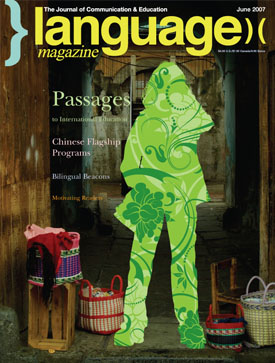 Immigration is once again top of the agenda, as politicians strive to create a workable solution for the 12 million undocumented workers in the U.S. which will placate liberals without riling conservative factions wary of shifts in the status quo.

The President seemed convinced in his radio address to the nation that English will make all the difference, “The key to unlocking the full promise of America is the ability to speak English. This bill affirms that English is the language of the United States. And it provides new opportunities for immigrants to learn English (an English instruction program freely available over the internet) and embrace the shared ideals that bind us as a nation.”
Obviously, English is the predominant language in the U.S., and an incredibly valuable asset the world over, but do we really need to declare it to be our national language and thereby diminish the status of other languages? At a time when more and more people are recognizing the benefits of a multilingual society, should we be alienating speakers of other languages?

The bill will also “accelerate the English requirements for some immigrants.” I have yet to meet a non-English speaking immigrant who is not desperate to learn English, because it opens the door to opportunities both economic and social which is the reason most immigrants come here in the first place. However, those immigrants who need to improve their English the most are in the least favorable position to do something about it. They often have to work at two or more jobs in order to survive and they often lack a basic education in any language, so to presume that they have the time and skills to self-teach themselves through an online program is overly optimistic. And we have not even broached the question of internet access, which is still a luxury beyond the reach of many immigrants.

Using the English requirement to ensure that only more affluent immigrants have the opportunity to legalize their status is disingenuous and contrary to the principle on which this nation was founded.

Flying the Flag for Chinese
Madeline K. Spring explains how the Oregon Chinese Flagship Program has taken a new approach to articulation