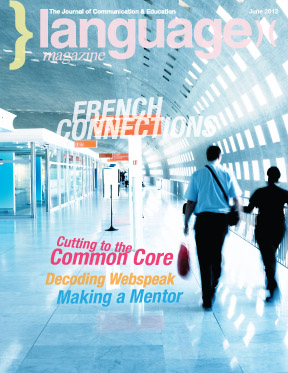 In this issue is the introduction to a series of articles on preparation for the implementation of the Common Core State Standards (CCSS) and their effect on the teaching of English Language Learners (ELLs). Even the most ardent supporters of theses standards must realize that they’re not a solution in themselves. However, many of the prescribed practices which accompany them warrant recommendation, especially the notion that every teacher needs to contribute to improving the literacy of their students now that the level of ELLs in our schools has risen above 10 percent.

The very idea of national standards being set for education which is clearly within the domain of state responsibility is bound to ignite controversy even if the initiative was ostensibly the brainchild of state governors rather than the federal government. The reality is that Washington supports the concept of universal standards and is even prepared to help pay for them. Speaking of which, there is considerable disagreement (like $10 billion worth) on what the CCSS will cost. At the end of May, the Thomas B. Fordham Foundation, a conservative research group and supporter of the CCSS, led by Reagan’s former assistant education secretary Chester Finn, challenged the $16 billion price tag estimated by the liberal-leaning Pioneer Institute, a frequent critic of the CCSS, by calculating that an optimistic, “balanced” approach cost of $1.2 billion.

Despite political and economic arguments, 45 states and the District of Columbia have committed to the implementation of the CCSS so supporters and critics alike may be best advised to analyze the standards to see what benefits might accrue from this investment. By design, the standards focus on results rather than methodology so teachers are not told how to teach but the requirements emphasize the development of academic and content-based vocabulary which has long been a focus for teachers of ELLs. Another embedded concept is that literacy needs to be the concern of every teacher which is hardly groundbreaking – some groups have been campaigning for all teachers to receive ELL-specific training for years. The vast majority of teachers are doing as good a job as they possibly can, given the resources at their disposal, and the CCSS are not a box of magic tricks that are suddenly going to transform the educational outcomes of every child in the country. Without some redistribution of resources (including increased funding for libraries because reading is the route to vocabulary acquisition) and a national effort to combat our obscene levels of childhood poverty, the setting of standards alone cannot be expected to close the achievement gap.

Unless cash-strapped states and their education departments are willing to provide the resources required to conform to these standards, we can only expect more of the same: Schools in suburban, middle-class areas will continue to do very well while those in impoverished urban areas, with high percentages of English learners, will continue to struggle.
On the other hand, this may be a great opportunity to really level the playing field by insisting on common core resources as well as common core standards.

Cutting to the Common Core
As the introduction to a series of articles on how implementation of the Common Core State Standards (CCSS) will affect teaching, Language Magazine presents a selection of expert advice