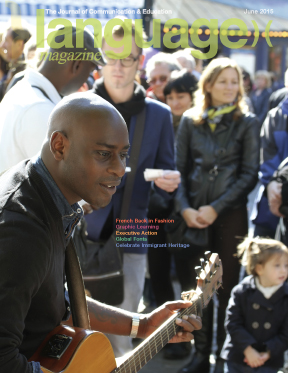 The designation of June as Immigrant Heritage Month in the U.S. may seem unnecessary when, as John F. Kennedy asserted over 50 years ago, “every American who ever lived, with the exception of one group [Native Americans], was either an immigrant himself or a descendant of immigrants” (A Nation of Immigrants, page 2). However, the rapidly increasing homogeneity of our society has made it more important than ever to celebrate, share, and capitalize on the diversity of our cultures and their associated languages.

Recognizing that America’s colonial languages — English, Spanish, and French — are immigrant languages allows us to put the nation’s language issues into context by helping us realize that our attachment to and reverence for English as a national treasure is the result of a colonial hangover.

Of course, it’s very helpful to have a common national language, and even more useful if that language happens to be the world’s lingua franca. However, we must cherish and value all of the immigrant languages with which this nation is blessed.

The U.S. Congress is now pushing forward by calling for the establishment of a Language Commission (see news, p12) to examine the importance of languages in our 21st-century society. This important step forward has come about largely because of a conceptual change in our regard of languages. Up until recently, world languages were regarded as a privilege of the elite while heritage, or immigrant, languages were seen as an obstacle on the path to creating an efficient, English-only workforce. Languages were, and often still are, seen completely differently from the incoming and outgoing perspectives. Over the last decade, organizations, including this magazine, have been working to change this bias by emphasizing the similarities between language-acquisition processes, be the goal to learn English as a second language or Japanese to further business ambitions. The establishment and success of dual-language programs in a range of languages, spread across the country, has done much to change public perception, while increased cooperation between ESL, bilingual, and world language educators has broken down barriers which should never have existed. Now, we are finally starting to recognize the complementary value of intercultural assimilation.

Immigrants and their cultures, languages, and skills are America’s greatest resource and, while there may be no environmental concerns about making the most of them, as there are with many other resources, there are painful social consequences to ignoring their value.

In our age of globalization, we have to recognize the value of our multicultural, multinational roots and ensure that immigrants, old and new, retain and share the skills, customs, and knowledge that they brought to this country so that all Americans can have a better understanding of the global village in which we live.

Join us in making an extra effort to appreciate and learn from an immigrant community outside of your own this month.

French à la mode
Gaétan Mathieu sees bilingualism as the key to the future of French in the U.S.

Destination France
Where and why to learn French in France

Books to Read to your Child this Father’s Day