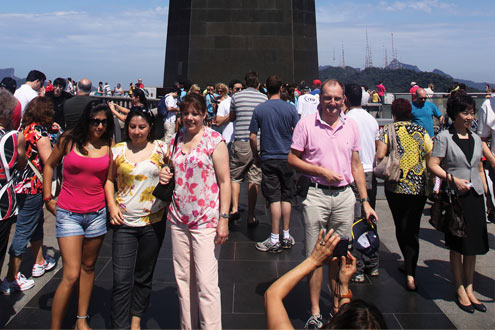 Richard Lederer on the Humanness of Language

For more than five decades I’ve had the joy of writing about language — from puns to punctuation, pronouns to pronunciation, diction to dictionaries, palaver to palindromes. From the time I began pouring my words about words into textbooks, journals, and books, I have always felt that I was writing about the most deeply human of inventions — language. Words and people are inextricably bound together. Whether the ground of your being is religion or science, you find that language is the hallmark, the defining characteristic that distinguishes humankind from the other creatures that walk and run and crawl and swim and fly and burrow in our world.

In the Genesis creation story that so majestically begins the Bible (Genesis 1:1-31; 2:1-6), we note the frequency and importance of verbs of speaking: “And God said, Let there be light; and there was light.… And God called the light Day, and the darkness he called Night.… And God said, Let there be a firmament in the midst of the waters.… And God called the firmament Heaven.” [Emphasis mine.]

Note those verbs of speaking and naming. God doesn’t just snap his fingers to bring the things of the universe into existence. He speaks them into being and then names each one.

And what happens when God creates Adam?: “And out of the ground the lord God formed every beast of the field, and every fowl of the air; and brought them unto Adam to see what he would call them: and whatsoever Adam called every living creature, that was the name thereof” (Genesis 2:19-22). In other words, Adam (Hebrew for “humankind”) does what God has done: He names things; he names voraciously; he names everything. Perhaps this is what the Bible means in Genesis 1:26-27: “And God said, Let us make man in our own image, after our likeness… So God created man in his own image, in the image of God created he him, male and female created he them.” Like God, man is a speaker and a namer.

If your mythos is science, you believe that many early hominid species, some of them co-existing, preceded the tenure of Homo sapiens. Today we take for granted that we are the only hominids on Earth, yet for at least four million years many hominid creatures shared the planet, including Homo habilis, Homo erectus, and, of course, Homo neanderthalensis.

What made us different? What allowed us to survive while our precursors disappeared? The answer is on the tip of our tongues. While some of these other species possessed the physical apparatus to talk, only with Homo sapiens did speech tremble into birth, did speech join forces with thought, did speech become creative and generative, did speech inflame us to name everything.

The birth of language is the dawn of humanity, and each is as old as the other. The appearance of language made us human, and our humanity ensured the survival of language. We human beings have always had language because before we had it we were not fully human and the sounds that escaped from the holes in hominid faces were not fully language. Not only do we possess language; we are language.