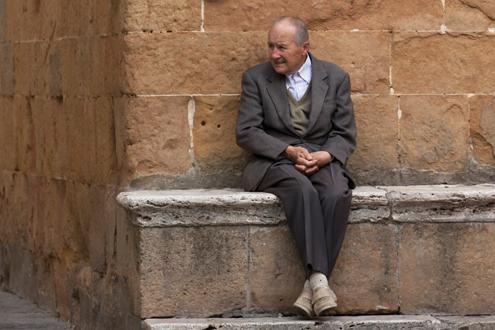 Richard Lederer has a Tense Time with Verbs

Verbs are the sparkplugs of our sentences and take their name from verbum, the Latin word for word.
Have you heard the one about the man who went to trial for having pulled a woman down a street by the hair? When the judge asked the arresting officer, “Was she drugged?” the policeman answered, “Yes sir, a full block.” Or the one about the woman who asked a Boston cab driver where she could get scrod. “I didn’t know that the verb had that past tense,” muttered the cabbie.
Both jokes rely on the fact that verb tenses in English are crazy, fraught with a fearful asymmetry and puzzling unpredictability. Some verbs form their past tense by adding -d, -ed, or -t-walk, walked; bend, bent. Others go back in time through an internal vowel change — begin, began; sing, sang. Another cluster adds -d or -t and undergoes an internal vowel change —lose, lost; buy, bought. And still others don’t change at all-set, set; put, put. No wonder, then, that our eyes glaze and our breath quickens when we have to form the past tense of verbs like dive, weave, shine, sneak, and babysit.
An English teacher spent a lot of time marking grammatical errors in her students’ written work. She wasn’t sure how much impact she was having until one overly busy day when she sat at her desk rubbing her temples.
A student asked, “What’s the matter, Mrs. Bennett?”
“Tense,” she replied, describing her emotional state.
After a slight pause the student tried again: “What was the matter? What has been the matter? What will be the matter? What might have been the matter?”
The past tenses of verbs in our language cause so many of us to become tense that I’ve written a poem about the insanity:

A Tense Time with Verbs

The verbs in English are a fright.
How can we learn to read and write?
Today we speak, but first we spoke;
Some faucets leak, but never loke.
Today we write, but first we wrote;
We bite our tongues, but never bote.

Each day I teach, for years I’ve taught,
And preachers preach, but never praught.
This tale I tell; this tale I told;
I smell the flowers, but never smold.

If knights still slay, as once they slew,
Then do we play, as once we plew?
If I still do as once I did,
Then do cows moo, as they once mid?

I love to sing, and songs I sang;
I fling a ball, but never flang.
I strike that ball, that ball I struck;
This poem I like, but never luck.

I take a break, a break I took;
I bake a cake, but never book.
I eat that cake, that cake I ate;
I beat an egg, but never bate.

I often swim, as I once swam;
I skim some milk, but never skam.
I fly a kite that I once flew;
I tie a knot, but never tew.

I see the truth, the truth I saw;
I flee from falsehood, never flaw.
I stand for truth, as I once stood;
I land a fish, but never lood.

About these verbs I sit and think.
These verbs don’t fit. They seem to wink
At me, who sat for years and thought
Of verbs that never fat or wrought.

Richard Lederer M.A.T. English and Education, Ph.D. Linguistics, is the author of more than 40 books on language, history, and humor. His new book, A Tribute to Teachers, is available now at his web site — www.verbivore.com. Write him at [email protected]