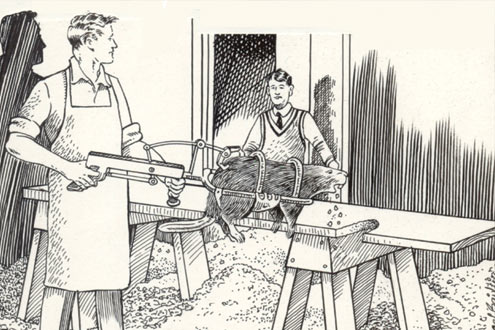 Garnering twelve Academy Award nominations and four Oscars, including Best Picture, The King’s Speech became, on February 28, the most honored film of the year. Among its many excellencies is the double entendre in its title. The word Speech in The King’s Speech means the speaking of George VI, the stammerer who did not want to become king. At the same time and in the same space, the word Speech means the particular address, in 1939, that King George VI delivered to his British subjects exhorting them to join in battle against the Germans.

In other words, Speech in the context of this triumphant film is an accordion word.

Like people, words grow after they are born. Once created, words seldom sit still and remain the same forever. Some words expand to take over larger territories: Once, fabulous meant “resembling or based on a fable.” Later came the expanded meaning, “incredible and marvelous.” A holiday first signified “a holy day,” but modern holidays include secular days, such as Valentine’s Day and Independence Day. Other words have traveled in the opposite direction. Meat began life as “food” and liquor as “drink.” Once an undertaker could undertake to do anything; nowadays undertakers specifically manage funerals. These words have narrowed considerably.

Some of our most intriguing words, such as speech, have retained both their broad and narrow meanings. These words expand and contract like an accordion. We know how big or small they are by their context.

Then there’s the word animal, which can be used at two levels in a hierarchy of inclusion: First, animal can mean anything living that does not grow from the earth, as in “animal, vegetable or mineral.” In this context animal includes human beings, beasts, birds, fishes, and insects. Second, animal can refer to beasts only, in contrast with human beings, as in “man and the animals share dominance of the earth.”

The use of man, above, yields another accordion word. Although the noun has come under increasing attack as sexist, man is still employed to refer both to all of humankind, as in Jacob Bronowski’s The Ascent of Man, and to only the male members of our species, as in “man and woman.” Similar is the word gay, which can designate all homosexuals, as in “gay rights,” or only male homosexuals, as in “the gay and lesbian community.”

Business started out as a general term meaning literally “busy-ness.” After several centuries of life, business picked up the narrower meaning of “commercial dealings.” In 1925 Calvin Coolidge used the word in both its generalized an specialized senses when he stated, “The chief business of the American people is business.” We today can see the word starting to generalize back to its first meaning in phrases like “I don’t like this funny business one bit.”

I have made up the term “accordion words” to describe these double-duty words. In the examples that follow, I list the broader meaning first, the narrower meaning second:

American: (1) a native or inhabitant of North or South America (2) a citizen of the U.S.

body: (1) the entire person, especially when dead: “They removed the body” (2) the main part of a person, as distinguished from head and limbs: “He took a hard right to the body.”

land: (1) the solid part of the earth’s surface, as contrasted to the sea (2) a country: “I’ve traveled all across this land.”

picture: (1) a series of images: “Casablanca is my favorite picture.” (1) a single image.
politics: (1) the art or science of human interactions: “The politics in this office are brutal.” (2) the art or science of human interactions concerned with government: “At an early age she decided to enter politics.”
segregate (similarly discriminate): (1) to set apart (2) to set apart on the basis of race.
temperature: (1) a degree of heat (2) too high a degree of heat: “You have a temperature.”
verse: (1) poetry. (2) a stanza in a poem.

Samuel Goldwyn once observed, “A verbal contract isn’t worth the paper it’s written on.” Obviously the movie mogul used verbal to mean “oral,” as do most speakers of American English. But verbal (Latin verbum, “word”) communication involves words spoken or written, as in “I’m trying to improve my verbal skills.” In this sense, Goldwyn’s Goldwynism isn’t so funny after all.

Richard Lederer, M.A.T. English and Education, Ph.D. Linguistics, is the author of more than 35 books on language, history, and humor. Explore his web site www.verbivore.com Write him at [email protected]