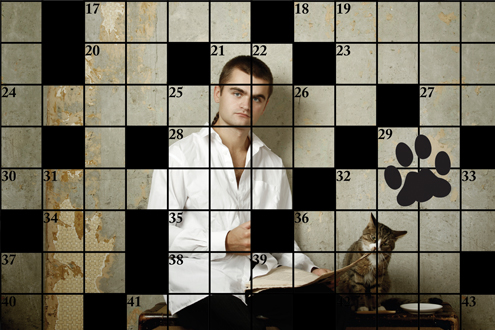 The very first crossword puzzle was concocted by one Arthur S. Wynne, a journalist from Liverpool and games section editor of the New York World. On December 21, 1913, Wynne’s poser appeared in the Sunday edition of the New York World, radiating into a diamond and containing no black squares. He modeled the puzzle after the traditional British word square, a group of words whose letters are arranged so that they read the same horizontally and vertically. No surprise, then, that Wynne christened his creation word-cross.

Four weeks later, typesetters at the newspaper inadvertently switched the two halves of word-cross and dropped the hyphen, and — presto! change-o! — the crossword puzzle was born.

In 1924, in an era of mah-jongg, goldfish swallowing, and bicycle racing, among other fads, Richard L. Simon and M. Lincoln Schuster published 3,000 copies of a book of 50 crossword puzzles titled The Cross Word Puzzle Book. The two men chose the imprint “The Plaza Publishing Company” (Plaza was their telephone exchange) in order to deflect the unfavorable feedback they were anticipating. Instead, the book sold 40,000 copies right off. Publishing giant Simon & Schuster was launched.

Crosswords became the biggest puzzle craze ever, and the publishing company of Simon & Schuster was born. The rage for crossword puzzles continued full blast into and through the Great Depression; and even today, they remain the most popular word game in the world.

To celebrate the centennial of Arthur Wynne’s invention of the genre, I, along with award-winning constructor Gayle Dean, have created 100 original crossword puzzles that we believe go across and up in the hierarchy of cruciverbal challenges.

With loving labor, we have combined the classical elegance of American crosswords with the sprightly wordplay of the British approach. Thus, we have themed every puzzle with a number of clues relating to puns, rhymes, anagrams, palindromes, bloopers, and the like.

We invite solvers to unlock many of our clues with wordplay as the key:
Ashtray: A place to rest your butt; Atlas: World’s biggest hold-up man; Atom: Father of the first nuclear family; Bee: Honey musterer; Dachshund: A long little doggy;
Drama teacher: Stage coach; Elopes: Takes the honey and runs; Gigolo: Fee-male; Lion: Predator-in-Chief; Magi: They made a star trek;
Midas: Gilty king, The original Goldfinger; Oscar: Statue of imitations; Nor: When it comes before Easter, you’re in trouble; Paris: Site for soirees; Pigs: Pen pals;
Santa Claus: Nick name, the Abdominal Snowman, the Deer Sleigher; Tax: Capital punishment; Tee: Driving platform, fore site, or a half giggle; Tenant: One who trades dollars for quarters; Toga: The sack of Rome.

We also love cobbling clues that involve letter play:
Assess: Pin the tail on the donkeys; Dog: A reflection of God;
Mar: Backward butter;
Omen: Beheaded women are a bad sign; Smiles: A mile long from ear to ear; Tint: I am in the middle of an explosive situation.