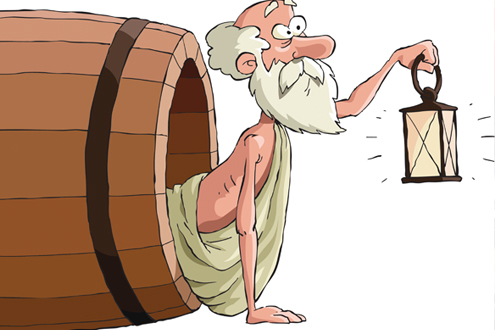 Diogenes (412?-323 BCE) of Sinope was an ancient Greek philosopher who rejected the hollow values he saw in Athenian society. One sign of that integrity was his practice of carrying a lantern around Athens in the daytime as he looked for an honest man. He never found one.

I come to you bearing the lantern of language learning. I am pleased to report that, more successfully than Diogenes, I do find men and women, many of them readers of my column, who:

* say and write “Where is he?” without tacking on a gratuitous at;
* distinguish between the verbs lie and lay, avoiding sentences such as “The book is laying on the table”;
* after someone says, “Thank you,” actually reply, “You’re welcome,” instead of “No problem”;
* in their speech, keep their ughs and ums to a minimum and avoid hiccoughing you knows;
* never toss a like into their conversation unless it’s a verb — “I like you on Facebook” — or a preposition — “There’s no other city like San Diego”;
* know the past tense of the word go as went and the perfect tense as gone, thus averting atrocities like “I should have went to the mud-wrestling extravaganza”;
* answer questions in 25 words or fewer, rather than 25 words or less, and recoil at supermarket signs that broadcast “15 items or less”;
* display house signs that read The Smiths or The Smiths’, but never The Smith’s;
* never talk about “an historic occasion”;
* pronounce the words nuclear, Realtor, and jewelry without transposing syllables, as in nucular, Relator and jewlery;
* sound both rs in library, forward, formerly, and even February;
* do not speak French-fried English with overly Frenchified pronunciations such as fwah-YAY, for-TAY, aneesh, and Bei-zhing.
* don’t dangle their particles in public by miscreating sentences like “We saw many bears driving through Yellowstone Park”;
* don’t hypercorrect their pronouns, as in “Between you and I, whom do you think will win the mud-wrestling championship?”;
* don’t employ affect as a noun unless they are psychiatrists or psychologists;
* use the serial comma, as in “red, white, and blue,” and place a comma before a direct address, as in “Hi, Gene,” rather than “Hi Gene”;
* can write and read cursive;
* go right ahead and introduce Jimmy Jones and thank Sally Smith, rather than hedging with “I’d like to introduce Jimmy Jones” and “I want to thank Sally Smith”;
* can read a book for hours at a time and enter the lives of the people who live and move and have their being in the story or glean the knowledge so eagerly offered;
* engage in literate conversation at family meals;
* provide their children with books and a place in the home to study and read;
* do not shy away from advising their children about their grammar;
* respect all dialects but urge that every American become fluent in standard English.
Are you one of these men or women?