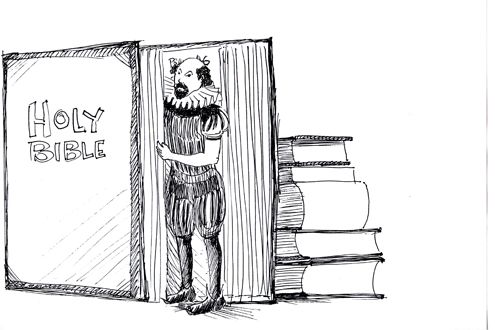 Richard Lederer wants to know if Shakespeare is hiding in the Bible?

This year we celebrate the four hundredth anniversary of the completion and printing of the most famous of all translations of the Bible, the King James Version. Some commentators have wondered why William Shakespeare was apparently not included among the fifty-four translators chosen. After all, Shakespeare had already written Macbeth in honor of King James (who also fancied himself an expert on witchcraft), and what better committee member could one ask for to work with the greatest collection of religious literature of all ages than the age’s greatest poet?
But an intriguing peculiarity in the King James Bible indicates that Shakespeare was not entirely absent from the monumental project. No one knows who made the astonishing discovery or how on earth he or she did it.
In 1610, the year of the most intensive work on the translation, Shakespeare was forty-six years old. Given this clue, we turn to the Forty-sixth Psalm as it appears in the King James Bible. Count down to the forty-sixth word from the beginning and then count up to the forty-sixth word from the end, excluding the cadential Selah:
God is our refuge and strength, a very present help in trouble.
Therefore will not we fear, though the earth be removed,
and though the mountains be carried into the midst of the sea;
Though the waters thereof roar and be troubled,
though the mountains shake with the swelling thereof. Selah.
There is a river, the streams whereof shall make glad the city of God,
the holy place of the tabernacle of the Most High.
God is in the midst of her; she shall not be moved:
God shall help her, and that right early.
The heathen raged, the kingdoms were moved:
he uttered his voice, the earth melted.
The Lord of hosts is with us; the God of Jacob is our refuge. Selah.
Come, behold the works of the Lord,
what desolations he hath made on earth;
He maketh wars to cease unto the end of the earth;
he breaketh the bow, and cutteth the spear in sunder;
he burneth the chariot in the fire.
Be still, and know that I am God:
I will be exalted among the heathen, I will be exalted in the earth.
The Lord of hosts is with us; the God of Jacob is our refuge. Selah.

If you counted accurately, your finger eventually lit upon the two words shake and spear. Shakespeare. Whether or not he created the majesty of the forty-sixth psalm, he is in it. Whether the embedded shake spear is a purposeful plant or the product of happy chance, the name of the world’s most famous poet reposes cunningly in the text of the world’s most famous translation.

Richard Lederer M.A.T. English and Education, Ph.D. Linguistics, is the author of more than 35 books on language, history, and humor. Explore his web site www.verbivore.com Write him at [email protected]