Richard Lederer on the legendary Yankee catcher, manager, and coach 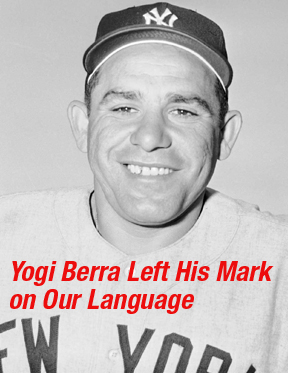 Over the centuries, some lucky people have been granted a measure of immortality by having their names transformed into common English words. One way to achieve such posthumous fame is to become so closely identified with an idea that your name becomes an ism.

Thusly, the names of philosophers Plato and Karl Marx are enshrined in the words Platonism and Marxism. French soldier Nicolas Chauvin pursued his patriotism with such excessive zeal that his name is, to this day, preserved in the concept of chauvinism.

The Rev. William Archibald Spooner occasionally and unintentionally interchanged initial consonant sounds in his statements: “Three cheers for our queer old dean!” and “Is it kisstomary to cuss the bride?” Such switcheroos are now dubbed spoonerisms.

The life and writings of the Marquis de Sade extolled the pleasures of inflicting pain, while the fictional characters of novelist Leopold Sacher-Masoch enjoyed receiving pain. Today the surnames of these two men live on in the words sadism and masochism. (As the story goes, the masochist pleads, “Beat me, beat me!” and the sadist sneers, “No!”

This past Tuesday, Lawrence Peter “Yogi” Berra, one of the most beautiful lives in Major League Baseball, retired from the great stadium of life at the age of 90. The legendary Yankee catcher played in 14 World Series, ten of them won by his New York Yankees, and caught Don Larsen’s perfect World Series game. Berra later exulted about that feat: “It’s never happened in World Series competition, and it still hasn’t.”

The man transcended baseball by creating such mind-boggling flights of linguistic non sequiturs and intuitive wisdom that Yogiisms and Berraisms have become part of our language and culture. As fellow catcher Joe Garagiola sagely observed, “Yogi Berra says things funny. He says things that are a split second off the hinges.”

Here are my ten favorite verbal screwballs that the 18-time All Star and Hall of Fame catcher has pitched over the years:

• You can observe a lot by watching.

• No wonder nobody comes there anymore. It’s too crowded.

• A nickel ain’t worth a dime anymore.

• Half the lies they tell me ain’t true.

• Ninety percent of this game is mental. The other half is physical.

• If people don’t want to come to the ballpark, you can’t stop them.

• I didn’t really say everything I said.

Yogi apparently passed his unique linguistic gene onto his son Dale, who played shortstop for the Pittsburgh Pirates. When asked to compare himself to his father, Dale replied, “Our similarities are different.”