Learning with Your Head in the Clouds 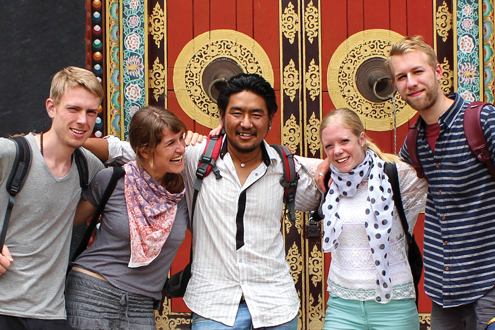 Kathmandu. The name itself evokes an ‘edge of the world’ exoticism that has drawn travelers, traders, and spiritual seekers to the heart of the Himalayan mountains for centuries. Tucked between the snow-capped mountains of the Tibetan Plateau and the Gangetic Plain of India, the kingdom of Nepal has long been a cultural and linguistic crossroads on the trading routes between those two great cultures, as well as home to the dozens of ethnic tribal groups inhabiting the country of Nepal itself. Nestled in a broad, fertile valley and surrounded by a ring of protective mountains, Kathmandu was historically a stopover on the trading and pilgrimage routes that wound through the Himalayas — a gathering point for merchants and mendicants and a mixing bowl of religions, goods, and languages.

In the mid-1900s, mountain climbers from America and Europe put the Kingdom of Nepal on the modern map as a destination for adventure seekers. By the 1970s, Kathmandu had entered the western consciousness as a mystical travel destination — a terminus of the “hippie trail” that ran from Amsterdam through Istanbul to the much-mythologized beaches of India or to the mist-shrouded mountains of Nepal. By the end of the century, summit climbers, scholars, wanderers, and aid workers — from Sir Edmund Hillary to Cat Stevens to Jimmy Carter — had made the Kathmandu Valley a modern gathering point of choice for adventurous people who were hungry to learn, to help, and to be challenged.

Today, inside of a Tibetan Buddhist monastery complex in the Boudhanath neighborhood of Kathmandu, that same desire for learning, service, and challenge is being played out by language students and professors from all over the world, all who have come to the Kathmandu Valley of Nepal — to study Tibetan, Nepali, and Sanskrit languages, and to immerse themselves in those new and ancient cultures. This modern-day cultural crossroads is called the Rangjung Yeshe Institute.

The Rangjung Yeshe Institute has offered study programs and seminars in Nepal for more than 25 years. Each year, hundreds of students, representing more than 25 different countries around the world, gather in Kathmandu to immerse themselves in the study of Himalayan languages. Hundreds more join RYI’s language courses online. On any given day, its classrooms may be filled with students from the U.S., Sweden, Mexico, Singapore, or Brazil, gazing intently at a whiteboard where a Tibetan language instructor is teaching the ABCs of Tibetan language. In the classroom next door, a Nepali professor may be instructing a room full of rapt students on how to chant in Sanskrit. At lunchtime, a table full of laughing exchange students from Boston College may be trying to order chocolate brownies in Nepali.

In the 1980s, the abbot of Ka-Nying Shedrub Ling Monastery began teaching Buddhist philosophy in Kathmandu to visitors who found themselves in the Tibetan neighborhood of Boudhanath, near the Great Stupa — a UNESCO World Heritage Site and historically one of the most sacred Buddhist pilgrimage sites in Asia. Sometimes language scholars would come to Boudhanath seeking out help with Tibetan language translation; sometimes tourists would ask maroon-robed monks where they could visit a Tibetan temple; often backpackers would simply wander in from the dusty streets. The abbot of Ka-Nying Monastery frequently spoke in Tibetan, and therefore his teachings needed to be translated into English in order for the visitors to understand. Eventually, a small group of Tibetan translators took up full-time residence in Boudhanath as, each year, more and more foreign students arrived. The monastery also became a rich resource for translated texts.

In 1997, the Rangjung Yeshe Institute was established as a Nepali non-governmental organization (NGO). In 2002, by virtue of a partnership formed with Kathmandu University, students were offered the opportunity to participate in language and philosophy programs, making almost-year-round study in Nepal possible. The original seminars taught in Ka-Nying Monastery have now fully blossomed into an internationally recognized, accredited institution where students can receive undergraduate and graduate degrees. Many students come for RYI’s non-degree programs, intensive summer studies programs, and translator training programs as well. Others follow RYI’s online learning courses at home. Current campus facilities are being expanded and, when complete, are expected to accommodate up to 200 students. About 95% of students are international and 5% are local Nepalis and Tibetans.

The teaching faculty at the institute consists of international professors from modern academic backgrounds, learned Tibetan professors, skilled translators of Tibetan and Sanskrit, and native Nepali and Tibetan language teachers. In addition, each year, the institute hosts a regular calendar of visiting professors, advisors, and lecturers from prestigious universities around the world.

Classical Tibetan (the ancient language of printed texts) and Colloquial Tibetan (the modern spoken language) are both taught, and students usually study them for different reasons — some to become Tibetan language translators and professors, and some as a way to simply enter more fully into the vibrant Tibetan culture of the Himalayan region. Programs are also offered on many levels of both Colloquial and Classical Tibetan — from beginning to advanced — including translation projects and advanced seminars. There is also instruction on Sanskrit language and four levels of Nepali language, allowing students to participate fully in the life and culture of Nepal. The translator training program is unique in the world in providing a twelve-month intensive training ground for serious translators of Tibetan language which trains students with one year of previous training, to be able to orally interpret from Tibetan into English.

“RYI has become a premier institution, not only in Asia but worldwide,” says Professor John Dunne of Emory University, who lectures there and often sends his own students to Kathmandu — some of whom have gone on to major PhD programs in the U.S. and Europe. Dunne and other scholars such as Prof. John Makransky of Boston College, Emeritus Prof. Tom Tillemans of University of Lausanne in Switzerland, and Prof. Georges Dreyfus of Williams College come to RYI as guest lecturers. These Western academics are joined by the many local Tibetan and Nepali professors who teach year-round at the institute.

Since 2004, in addition to its regular academic-year programs, the institute has offered a series of summer studies programs. These eight-week courses are very popular with international students wanting an intensive language training experience on-site in the Kathmandu Valley of Nepal. The summer classes are held within the Ka-Nying Monastery complex, just a short walk from the Great Stupa at Boudhanath, where students are able to practice their new Tibetan and Nepali language skills on a daily basis. The summer faculty consists of both traditionally trained Tibetan teachers and international instructors trained in modern disciplines — providing an in-depth and multifaceted learning experience. All of the summer programs are fully accredited by Kathmandu University.

The summer language progams feature daily one-on-one language training with native speakers — an invaluable opportunity to accelerate practice and confidence in the new language. In addition, optional homestays with Tibetan and Nepalese families offer students a full immersion into Tibetan and Nepali culture and the hands-on experience of living and eating with a local family.

In the past, RYI has offered eight-week courses in beginning through advanced Colloquial Tibetan language. This summer, for the first time, it offered a course in beginning Classical Tibetan. Seventy-eight students from a total of 20 different countries came to Kathmandu to study during the 2013 Summer Studies Program.

This summer, the institute also offered an eight-week class for beginning Sanskrit, providing students with a thorough grounding for the basics of Sanskrit and an introduction to Sanskrit grammar. Students were led through actual classic Sanskrit texts in a detailed manner and in such a way that by the end of the summer they emerged with a basic vocabulary and a fundamental ability to understand meaning.

The 2013 summer program also included a very intensive intermediate-level Nepali language class which was designed to emphasize conversational fluency. Students in the Intermediate Nepali class were able to live with local Nepalese families, carefully selected by the institute — eating meals and living with the families for eight weeks — and emerged with a high proficiency in the Nepali language.

For students who are unable to come to the Kathmandu Valley in Nepal to study Tibetan language, the Rangjung Yeshe Institute has developed an online learning program that brings the richness of that language to the rest of the world. Since 2009, it has offered online courses to hundreds of students in the U.S., Europe, South America, and Southeast Asia. This year, the institute provided its international students with access to two new online classes: The Tibetan Alphabet, and Introduction to Classical Tibetan.

The Tibetan Alphabet is a short course designed to guide students through the basics of learning the 30 “letters” and four “vowels” of the Tibetan language. After completing the course, students are able to spell according to the Tibetan spelling system and to read short sentences in Tibetan. RYI’s Introduction to Classical Tibetan online course allows students who have a basic understanding of the Tibetan alphabet to begin developing grammar skills and to start working with Classical Tibetan literature. Both courses are available for interactive study with a moderator or in a self-study format and are two of the very few online courses, worldwide, that offer foreign students the opportunity to learn the Tibetan language.

From the trading caravans winding through the Himalayas, linking Tibet, Nepal, India, and the rest of the world, to the fiber-optic cables and satellite signals that link them now, the Kathmandu Valley has long been a nexus of cultures and languages and a unique place of discovery. And while many learning institutions on other continents run headlong towards a predictable future, the Rangjung Yeshe Institute continues to grow and flourish in the seemingly contradictory dance between the traditional and the modern. Here in the crowded streets of Kathmandu, the students of myriad languages, ideas, and religions still make the pilgrimage, as they have for centuries, and come away forever changed by what they experience.