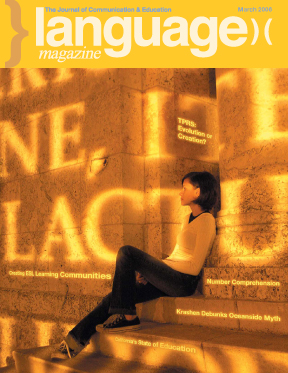 Last month saw the publication of a long-awaited report on the effects of the implementation of Proposition 227 on English language learners in California (see p.13). The purpose of the five-year evaluation was to determine whether bilingual education or the “English-only” approach better served the needs of the state’s millions of English learners. The report’s overall conclusion “is that there is no clear evidence to support an argument of the superiority of one EL instructional approach over another.”

Now, what can we ascertain from the fact that this independent, in-depth report was unable to determine which methodology worked best?

Well, the criteria used for assessing their relative success was the acquisition of English according to standard examination results, which immediately discounts many of the advantages of bilingual education, including the retention of heritage languages and culture. And, we can only presume that schools are placing more emphasis on the speed with which English learners are redesignated as English-proficient since the passing of the proposition and the ensuing public attention. And, as the implementation of the English immersion methodology has coincided with the implementation of high-stakes testing under No Child Left Behind, one would expect a significant improvement in test results.

However, the truth seems to be that there is no such thing as a “cure-all” for the education of English language learners. The report concludes that “a new paradigm, shifting away from the immersion/bilingual debate, is needed to focus more on the larger array of factors that make a difference for EL achievement.”

Most teachers could have told you years ago that the fundamental needs of English language learners are the same as all students — they need properly qualified teachers, smaller class sizes, well-stocked libraries, etc. In short, we need to adequately fund all of our schools, not just those in the affluent suburbs. We need to change our priorities if we really care about the future of our children, as author and professor, David Orr so eloquently expresses: “No society that loved children would consign nearly one in five to poverty… No society that loved its children would build so many prisons and so few parks and schools.”

Next month, Language Magazine will publish summaries of some of the key findings of the National Literacy Panel on Language-Minority Children and Youth’s research on the education of language-minority children in anticipation of its publication in full by international academic publisher, Lawrence Erlbaum Associates.
No doubt this report will shed further light on the issue, but the fundamental needs of all students will remain the same.

TPRS: Evolution or Creation?
Carol Gaab explains how TPRS has developed to become one of language teaching’s most valuable methodologies

Frill-filled Multimedia for Less
Steven Donahue trials LangLab, the low-cost multimedia lab that works on both Windows and Mac

Last Writes
Richard Lederer with The Game is in the Name